WorldSBK: Chaz Davies makes it a double on his Ducati winning Race 2 as well, in WorldSSP victory for Jules Cluzel astride his MV Agusta; the new soft rear solutions brought by Pirelli do well

In Superbike the Welshman takes his third double win of the season, in Supersport the championship title will have to wait until next round due to Sofuoglu's crash. The SC0 development solutions, V0377 in SBK and V0467 in SSP, are the most used by the riders 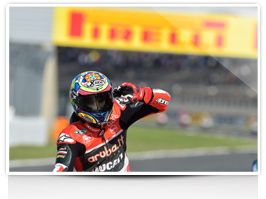 This weekend definitely turned out to be the right one for Chaz Davies and team Aruba.it Racing – Ducati who, after winning Race 1 on Saturday, finished on the top step of the podium Sunday in Race 2 as well, leaving the Kawasakis ridden by World Champions Tom Sykes and Jonathan Rea behind. Kenan Sofuoglu (Kawasaki Puccetti Racing) will certainly be less satisfied who, precisely when he was leading the WorldSSP race and had already begun to taste the 2016 world championship title, crashed out of the race, which was then won by Frenchman Jules Cluzel astride his MV Agusta. It was also an interesting round for Pirelli, who were able to receive important feedback on both wet and dry solutions. In fact, on Saturday, the riders successfully tested the new V0830 front rain tyre which, even on a track that was progressively drying out, demonstrated excellent performance, even allowing some of the riders to finish the entire race without changing tyres and, above all, without showing signs of obvious deterioration or wear. Other satisfying feedback also arrived on the DIABLO™ Wet, chosen by, in addition to other riders, Chaz Davies to win Race 1. The dry solutions, on the other hand, were the protagonists on Sunday, particularly the soft development solutions. The SC0 development solutions, V0377 in SBK and V0467 in SSP, were indisputably the most used by the riders. There were twenty-one laps in Race 2. Jonathan Rea (Kawasaki Racing Team) got off the line well from first place, but he was overtaken first by his teammate Tom Sykes and then by Chaz Davies (Aruba.it Racing – Ducati). Already during the fourth lap, Tom Sykes tried to pull the pin and run away at the front, building up a gap of about a second on Davies and Rea, but then in the fifth lap, Rea overtook Davies to move into second place. Toward the mid-race point, the battle between the two Kawasaki riders for the top step of the podium began to heat up. Rea and Sykes were within less than three tenths of one another, with Chaz Davies a second and a half behind. Everything changed in the eighteenth lap, when Chaz Davies took advantage of the battle between the two Kawasaki riders, overtaking them both to move into the lead. Sykes stayed in second place and Rea was temporarily relegated to third. In the next lap, the Northern Irishman managed to get the upper hand on his teammate, moving into second, and this would also be the finishing order. Three British riders on the podium and the third double win of the season for Chaz Davies, while Jonathan Rea takes his advantage in the overall standings to 48 points ahead of teammate Sykes. The Ducati that was the start of the French weekend is lying third with 81 points. Race 2 standings: 1) Chaz Davies (Aruba.it Racing – Ducati) 2) Jonathan Rea (Kawasaki Racing Team) 3) Tom Sykes (Kawasaki Racing Team) 4) Leon Camier (MV Agusta Reparto Corse) 5) Michael Van Der Mark (Honda World Superbike Team) 6) Lorenzo Savadori (IodaRacing Team) 7) Jordi Torres (Althea Racing Team) 8 ) Sylvain Guintoli (Pata Yamaha Official WorldSBK Team) 9) Nicky Hayden (Honda World Superbike Team) 10) Xavi Forés (Barni Racing Team) … 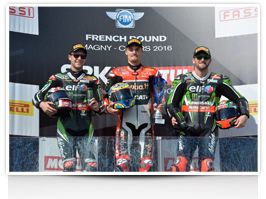 The red lights switched off at 11:20 for the FIM Supersport World Championship race with nineteen laps to ride, 23°C asphalt temperature and victory for hometown hero Jules Cluzel astride his MV Agusta. After winning Superpole® on Saturday, Kenan Sofuoglu (Kawasaki Puccetti Racing) had a very good race start. Jules Cluzel (MV Agusta Reparto Corse), who started from the fifth spot on the grid, overtook the riders ahead of him in just a few laps, catching up the Turkish rider, and during the fifth lap he tried to launch an attack for the lead. Behind them, Ayrton Badovini (Gemar Balloons - Team Lorini) who was now in third place after starting form the second spot on the grid, found himself with Gino Rea (GRT Racing Team) in his slipstream. The first four riders were within a gap of less than seven tenths of one another. The turning point came in the eighth lap: Gino Rea was forced to retire after a crash whilst trying to make up ground on Niki Tuuli (Kallio Racing) who, in the meantime, had overtaken him to move into third place. Sofuoglu, Cluzel and Tuuli seemed to have a better pace than the other riders and they formed a compact leading trio, igniting a three-way battle for the lead. Under pressure, on the twelfth lap Sofuoglu made a mistake that would cost him the race: after a crash that sent the bike into the gravel, he was forced to retire and postpone earning the points needed to be crowned 2016 world champion until Jerez de la Frontera. The new race leader was Niki Tuuli after managing to overtake the MV Agusta Frenchman a few corners later. The remaining laps of the race held no particular surprises until the final lap, when Jules Cluzel launched a decisive attack on Niki Tuuli, conquering the lead, while Ayrton Badovini moved into third place after overtaking Axel Bassani. Supersport standings: 1) Jules Cluzel (MV Agusta Reparto Corse) 2) Niki Tuuli (Kallio Racing) 3) Ayrton Badovini (Gemar Balloons - Team Lorini) 4) Axel Bassani (San Carlo Team Italia) 5) Randy Krummenacher (Kawasaki Puccetti Racing) 6) Federico Caricasulo (Bardahl Evan Bros. Honda Racing) 7) Kyle Smith (CIA Landlord Insurance Honda) 8 ) Illia Mikhalchik (DS Junior Team) 9) Lorenzo Zanetti (MV Agusta Reparto Corse) 10) Zulfahmi Khairrudin (Orelac Racing VerdNatura) ... 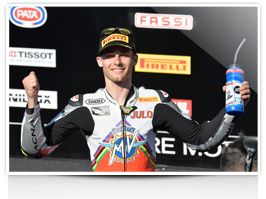 After WorldSBK Race 2, the Superstock 1000 FIM Cup race was held. There were thirty-five riders on the grid with Lucas Mahias (PATA Yamaha Official Stock Team) in pole position, followed by Raffaele de Rosa (Althea BMW Racing Team), second in the overall standings with 14 points behind Leandro Mercado (Aruba.it Racing - Junior Team), who started this race from the sixth spot on the grid. In the end, the Argentinian was unable to get into the mix, finishing the race seventh. The win went to Lucas Mahias and Raffaele De Rosa took an important third place behind Toprak Razgatioglu (Kawasaki Puccetti Racing) who, just in the last lap, managed to overtake the Italian to finish in second place. With this third place finish, De Rosa moves to 7 points behind Mercado who still holds onto the Championship lead. A Championship that will be decided in two weeks’ time at Jerez de la Frontera, the final round of the season for this category. The Pirelli solutions chosen by the riders for Race 2 and Supersport: For the Superbike category, compared with Race 1 on Saturday, in Race 2 tyre choices were decidedly simpler and more uniform thanks to the sun that came out to warm the French countryside around Nevers in the morning. With asphalt temperatures above 25°C, most of the riders chose a soft solution on the rear. Specifically, the choice fell on the V0377 SC0 development solution (option B), a tyre that made its first and successful appearance at Donington Park and it was also the most used tyre at Misano. As for the front, as always, each rider used the solution that best suited his own riding style. In general, the most used compound was the standard SC2 (option C), chosen by nine riders, including Sykes and Rea. However, almost as many riders opted instead for the U0176 SC1 development solution (option B). 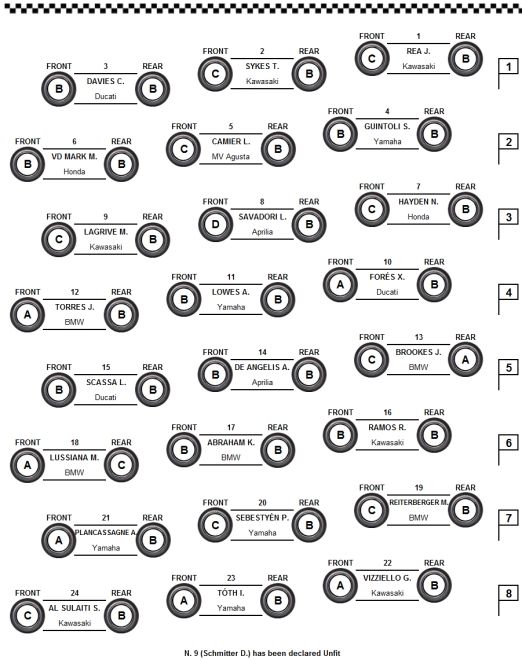 In the WorldSSP race, the asphalt temperature at the start was 22°C, therefore most of the riders went with soft rear tyres. On the front the most popular solution was the standard SC1 (option A), chosen by about 60% of the riders on the starting grid. Those who did not choose this solution, opted for the V0533 SC1 development solution (option B), used by, among others, race winner Jules Cluzel. For the rear, the new V0467 SC0 development solution (option B) prevailed, which was making its début right here in this round and had never before been used by the riders. Twenty riders chose this solution. WorldSBK: Chaz Davies makes it a double on his Ducati winning Race 2 as well, in WorldSSP victory for Jules Cluzel astride his MV Agusta; the new soft rear solutions brought by Pirelli do well
Newsroom