The Pirelli-supported FIA WRC Academy makes its asphalt debut on Rallye Deutschland this week (August 18-20), held as always around the ancient university city of Trier, located on the banks of the Mosel River. While Germany is a mainly all-asphalt rally, it is the toughest sealed-surface round of the entire series, which has a very different character over each day of the event: testing every aspect of the skills of the young drivers who participate in the Academy: a joint initiative between the FIA, the governing body of world motorsport, and the WRC promoter North One Sport. To put the emphasis firmly on driving talent, the competitors all drive identical Ford Fiesta R2s running on control Pirelli tyres. 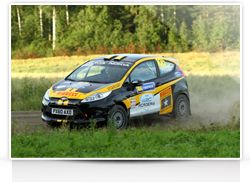 The opening day of Rallye Deutschland takes in tight and twisty roads through the vineyards of the Mosel, with several short straights and hairpin bends. Day two incorporates the notorious Baumholder military ranges, which are characterised by concrete roads that were previously used by the German army for testing tanks. The consequences of losing grip and making a mistake here are serious, as the stages are flanked by huge concrete blocks known locally as hinkelsteins. The Pirelli P Zero asphalt tyres that the 16 young drivers who form part of the Academy use will have to display consistent traction and grip under a huge variety of Tarmac conditions. Adding to the challenge is the changeable weather that is a hallmark of Rallye Deutschland, with heavy rain as much of a possibility as bright sunshine in mid-August. Throughout the Baumholder area in particular, the roads become extremely slippery when wet. Pirelli will supply its hard compound P Zero RX5 tyre for use in dry conditions while making its soft compound P Zero RE7 available in the event of rain or damp surfaces. Rallye Deutschland gets underway with a ceremonial start at Porta Nigra, a UNESCO World Heritage Site, in the centre of Trier on Thursday evening (August 18). The Academy drivers will tackle six stages on Friday and a further eight on Saturday prior to the finish that night. Pirelli’s motorsport director Paul Hembery commented: “Asphalt has always been a massive challenge for any young driver, as it requires the maximum skill and precision. The same applies for our tyres, which have to deliver the best traction possible under constantly changing circumstances. The WRC Academy provides a level playing field for the next generation of champions to display their skills, with no outside factors, and it will be fascinating to see how they deal with this latest task ahead of them.” Estonian driver Egon Kaur has won the opening three rounds of the series (in Portugal, Italy and Finland) to open up a 52-point lead over Irishman Craig Breen and Australian Brendon Reeves. Breen and Reeves are among six Pirelli Star Drivers competing in the WRC Academy this year after they were chosen following a rigorous assessment programme in Spain last autumn. Fredrik Ahlin (Sweden), Jan Cerny (Czech Republic), Andrea Crugnola (Italy) and Molly Taylor (Australia) complete the Pirelli Star Driver line-up in Germany. For further information contact: Anthony Peacock +44 7765 896930 anthony@mediatica.co.uk