WRC BACK TO AFRICA ON PIRELLI SCORPION KX TYRES 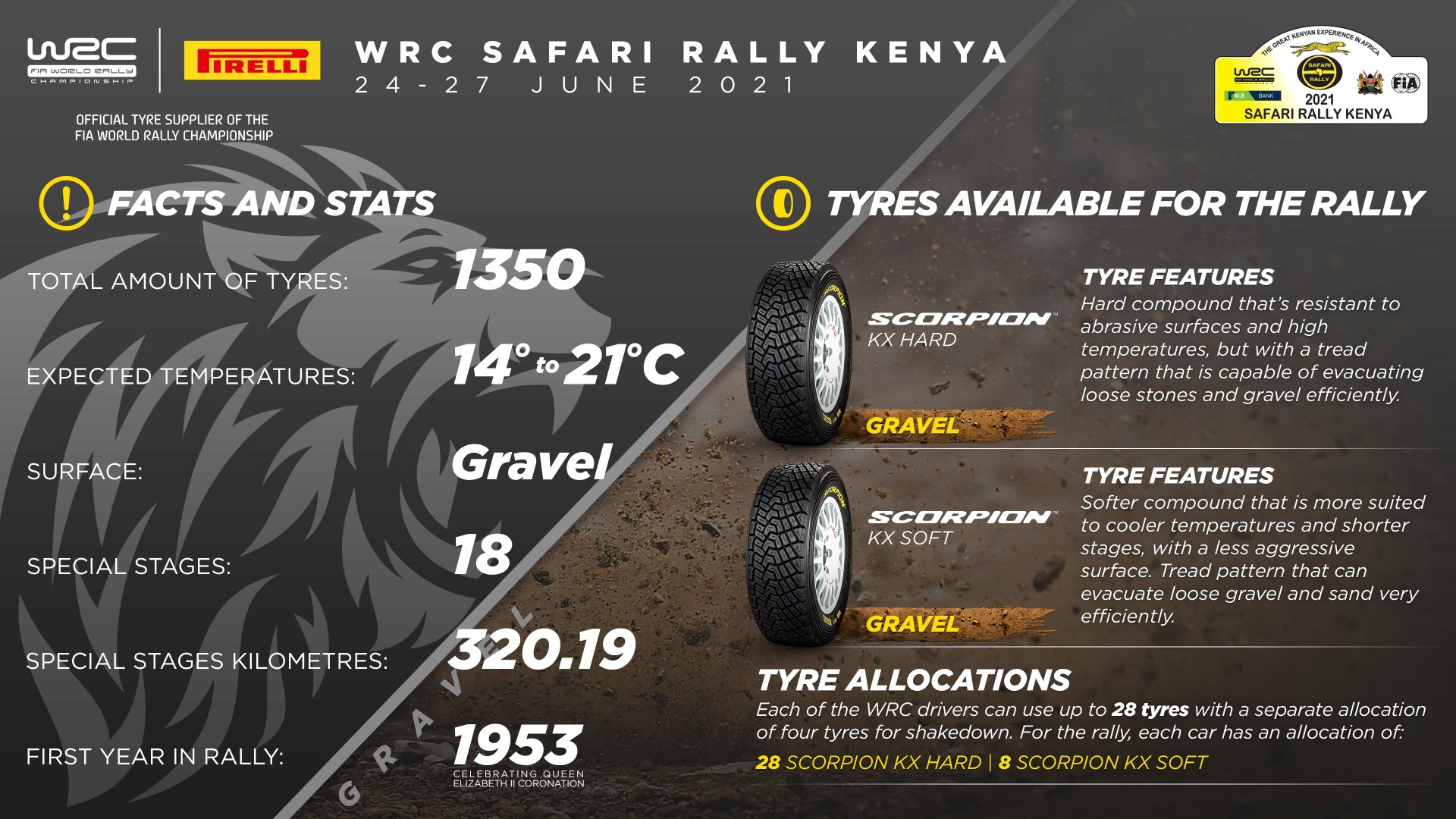 Milan, June 21, 2021 – One of the most legendary events in motorsport, the Safari Rally in Kenya returns to the FIA World Rally Championship for the first time since 2002. Pirelli will equip all of cars in the top category with its Scorpion KX gravel tyres for what could well be the most demanding rally of the season.

The Pirelli tyres in Kenya

Scorpion KX: Pirelli’s gravel rally tyre comes in hard and soft compounds. In Kenya, the hard will be the first choice and is designed to cope with the most abrasive surfaces and offer durability over longer stages. The soft will be an alternative providing optimal grip in cooler or damp conditions. In both compounds, the tyre features additional reinforcement, particularly in the sidewall, to guard against cuts and lacerations.

Scorpion K: Pirelli’s gravel tyre for RC2 cars, reinforced to cater the for the demands of Kenya, and with many of the characteristics of the KX fitted to the top cars.

Terenzio Testoni, rally activity manager: “We are excited to be returning with the World Rally Championship to Africa and the Safari Rally. As a company, Pirelli has a lot of experience in Kenya, having won there many times in the past with great drivers, and it has always been a considerable technical challenge. Of course, the modern event will not cover the same vast distances as before, but we can still expect a rough and abrasive surface, as well as long sections with sustained high speeds, which will test the performance of our products. We also know how much things can change there with the weather, and how the teams and drivers manage their limited allocation of soft tyres could be an important element.”

Pirelli will bring around 1350 tyres to Kenya, of which 450 will be for the top class of World Rally Cars.

Each of the WRC drivers can use up to 28 tyres during the rally, with a separate allocation of four tyres for shakedown. For the rally, each car has a total allocation of:

Pirelli will also supply 900 tyres to the other four-wheel drive cars in the event, including those entered in WRC 2 and WRC 3:

The big number: 2002. The last time the Safari Rally ran as a WRC round was in 2002 – when Pirelli claimed victory with Colin McRae and the Ford Focus WRC. It was McRae’s third win on the event, and his second with Pirelli. The spectacular Scot’s breakthrough Safari win in 1997 with Subaru had been Pirelli’s 100th WRC victory.

Usually, the stages in Kenya are dry and dusty, but heavy rain can totally transform some sections into deep mud baths. This can create a large contrast in conditions within the same stage, making tyre choice vital but tricky. In the past, one of the keys to rally victory in Kenya was always avoiding punctures – and this should still be the case today.

Car modifications. The classic snorkels and bull-bars of the past are not expected to make a comeback for the Safari’s WRC return, but the teams are still expected to try to strengthen their cars as much as possible: a sign of how demanding the stages are expected to be compared to other WRC rounds.

WRC BACK TO AFRICA ON PIRELLI SCORPION KX TYRES
Newsroom