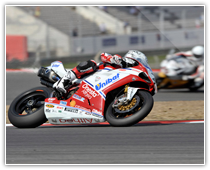 The final round of the 2011 World Superbike Championship (WSBK) was held in Portugal on Sunday 16th October. And the riders on the Algarve’s Portimão Circuit sent 86,000 fans into raptures. Giorgio Barbier, Pirelli Moto Racing Director, underlines that “The Portimão event ends a highly successful season for Pirelli. May I once again congratulate the new world champions in all classes. In particular Carlos Checa and Fabien Foret, respective winners in the Superbike and Supersport classes of the 2011 Pirelli ”. Throughout 2011, Pirelli has demonstrated a serious, ongoing commitment to WSBK as far as both development and logistics are concerned. “On average, we took”, Barbier specifies, “a total of 5,000 tyres to eachround, about 20,000 of which were used by the riders of the 5 classes over the course of the year.” As this end-of-season synopsis continues, it emerges that around eighty different compounds were provided, more than 35 of which being specifically designed for SBK. Pirelli assigned 8 fitting/removal/balancing teams working alongside each other during each race. “On average”, Barbier continues, “our men fitted/removed 210 tyres per hour with between 7 and 9 trucks being used for each round to carry tyres and equipment”. This year, for the first time Pirelli has decided that the future of this sport needs to be considered by encouraging talented young riders from the national Superstock 600 championships. This has led to the introduction of the Pirelli Superstock 600 Series, a project that has given the most talented riders from the various STK600 European championships the opportunity of receiving a wild card to compete in the European Superstock 600 Championship race held in Portimão. “Of these riders, the three highest placed finishers received a commemorative plaque and a cash prize to help them continue their riding career”, the Pirelli Moto Racing Director advises. And once again, this year’s World Superbike Championship has proven to be an excellent laboratory: “especially in developing state-of-the-art technological solutions that we can eventually pass on to our customers, thus sticking to our age-old slogan: We sell what we race, we race what we sell”, Giorgio Barbier concludes. WSBK is due to make its return in February 2012 with the Australian GP to be held at Phillip Island. PIRELLI_BEST_LAP_AWARD 2011