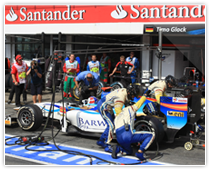 An inspired tyre strategy helped Barwa Addax driver Jonny Cecotto to a win in the GP2 feature race from 18th on the grid, as well as Trident’s Stephane Richelmi to a debut podium from 22nd in the GP2 feature race on Saturday at Hockenheim. All the drivers started the race on the blue-marked wet tyres apart from Cecotto and Richelmi, Cecotto chose to start on the P Zero slick medium tyres, which were nominated for GP2 in Hockenheim together with the soft tyres. Conditions started off with a damp circuit, which dried rapidly, but within five laps the surface reached the crossover point where it was quicker to switch to slick tyres – as shown by some fastest laps from Cecotto. After six laps the Venezuelan took the lead as the majority of drivers switched to slicks. Cecotto made his own stop with 14 laps to go, and was able to save time by changing just two rear wheels as opposed to his rivals who had to change all four tyres from wets to slicks. Richelmi was the only other driver to start on slick tyres – this time the soft compound – and after a change of rear tyres on lap 23 he was able to go from 22nd on the grid to a spectacular third at the finish. The weather also dominated the opening GP3 race, with a downpour soaking Hockenheim just before the start. Lotus driver Daniel Abt qualified on pole and started his home race behind the safety car – having just changed from wet tyres to the medium slick, nominated for GP3 at Hockenheim, before the rain fell. His team mate Conor Daly was the highest-placed driver to start on wet tyres and took the lead from third after all the drivers on slicks pitted at the end of lap one. The race was red-flagged after the second lap due to too much standing water and eventually re-started under the safety car, with Jenzer driver Patric Niederhauser – who also started on wet tyres, from eighth on the grid – taking the lead after the re-start and going on to claim his second win of the year from Daly. The GP3 sprint race on Sunday morning was held in completely dry conditions with all the drivers using the medium tyre. MW Arden’s Mitch Evans won from Abt to lead the championship after a race that was interrupted by two lengthy safety car periods. This was followed by the second GP2 race, which was claimed by Lotus driver James Calado who started from pole after finishing eighth in race one and used the medium tyres from start to finish without making a pit stop. The same strategy was adopted by the rest of the top three, which consisted of Caterham’s Giedo van der Garde (who qualified on pole for race one) and DAMS driver Felipe Nasr. Cecotto adopted a different strategy, running the soft tyre for the whole 27-lap race to finish sixth and make the most of a tactical weekend where tyre strategy was at the forefront. 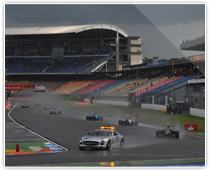 Pirelli’s racing manager Mario Isola commented: “The tyre strategy was the key to two great results from Cecotto and Richelmi on Saturday, who took a calculated gamble and made it work. They were able to anticipate how the track would dry and this made the difference after a rain-affected qualifying. The same applied in GP3, with first and second places for Niederhauser and Daly on Saturday the direct result of their decision to start on wet tyres. During the sprint races on Sunday it was a question of looking after the tyres as much as possible, with none of the frontrunners choosing to make a pit stop, although the new regulations now allow them to. Correct tyre management really made a big difference once more: Calado set his fastest lap three laps from the end of the GP2 race, which he won, while Cecotto was able to use the softer compound from start to finish and still make up places.” *** Copyright-free video news releases featuring interviews with Paul Hembery, as well as photographs and press releases are available for media use from: www.pirelli.com/f1pressarea. Follow us on Twitter @ Pirelli_Media or Facebook on www.facebook.com/Pirelli For further information please contact: Alexandra Schieren +33 607 03 69 03 alexandra.schieren@pirelli.com Anthony Peacock +44 7765 896 930 anthony@mediatica.co.uk *** Francescopaolo Tarallo +39 334 684 4307 francescopaolo.tarallo@pirelli.com (Head of Product and Motorsport Communications)