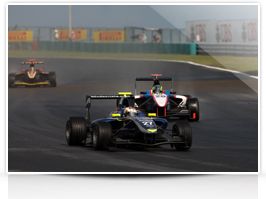 With high temperatures and a twisty circuit layout the GP2 and GP3 drivers had to look after their tyres at the Hungaroring: the oldest purpose-built facility on the calendar. The P Zero White medium and P Zero Red supersoft were nominated for GP2 at the Hungaroring, with drivers benefitting from two sets of the softer compound and three sets of the harder compound. This was the first real opportunity for the drivers to evaluate both compounds in free practice, without the wet weather that has characterised Friday’s action since the new regulation was introduced at Silverstone. Englishman Max Chilton started the 37-lap feature race on Saturday from pole for Carlin, using a new set of medium tyres. The four drivers behind him on the grid all began on the supersoft compound, with Giedo van der Garde (Caterham) the next highest placed driver to start the race on the medium compound, from sixth. Most of the drivers who started on the supersoft came in to switch to the medium tyre after 11 to 13 laps, with Chilton stopping after 13 laps for another set of mediums. This dropped him to seventh, with the six drivers ahead of him yet to stop. As the drivers in front progressively pitted, Chilton was able to regain the lead in the closing stages – having saved time in the pits by changing only the rear tyres. Those who used both compounds were obliged to change all four tyres, which takes around three to four seconds longer. The GP3 drivers benefitted from Pirelli’s soft compound tyre for the Hungaroring. Lotus driver Aaro Vainio used it to break the circuit’s GP3 lap record during qualifying, but his slow start in Saturday’s race one allowed Antonio Felix da Costa to continue a successful weekend for Carlin and win the race. 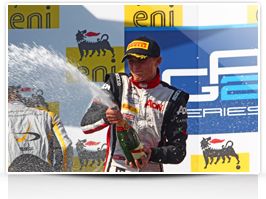 Da Costa took another brilliant win on Sunday morning, sealed when he picked exactly the right moment to change onto slicks on a slowly drying track. A downpour before the start of the GP3 sprint race meant that most teams started on wets, although nine drivers towards the back of the grid gambled on slicks from the beginning. Da Costa started from eighth on wets but had worked his way up to fifth when he pitted for slicks on lap eight of 16. Those who remained on wet tyres were lapping up to 10 seconds a lap slower than those on slicks at the end, allowing Da Costa to slice his way through the field and win by 11 seconds. The GP2 sprint race, which took place immediately afterwards, was held in totally dry conditions. Only two drivers – Chilton and van der Garde – selected supersoft tyres, (having used two sets of mediums in race one) with the rest starting on mediums. Lotus driver Esteban Gutierrez won from reverse pole, while Arden’s Felipe Nasr also did an exceptional job to finish in a points-scoring eighth, having started from last after retiring from the feature race yesterday. The supersoft runners showed very good pace at the start of the 28-lap race, but dropped away towards the end as the tyres degraded. Pirelli’s racing manager Mario Isola commented: “Max Chilton did a fantastic job that centred around tyre strategy on the feature race: snatching pole in the closing seconds by timing his best lap to perfection in the wet and dry qualifying session, and also selecting the most effective strategy to convert pole position to a race win. He undercut a number of his key rivals by stopping before them, and the decision to go with the medium compound for the whole race to save time in the pits – a strategy also selected by van der Garde – was crucial. From then on, he put in a fantastically mature drive to let the strategy come to him, while maintaining enough pace to make sure that nobody could jump in front of him during the pit stops. Da Costa’s spectacular win in the second GP3 race on Sunday was the result of judging the crossover point, where it is faster to move from wets to slicks, completely correctly and reacting instantly. With some drivers choosing to stick with wets – which still resisted well on a completely dry circuit – we saw a huge variety of strategies in play, which is unusual for the GP3 sprint race, but as always selecting the correct one was key to victory. Both championships are doing a fantastic job to prepare the drivers for what they will face next as their careers progress towards the pinnacle of the sport.” Copyright-free video news releases featuring interviews with Paul Hembery, as well as photographs and press releases are available for media use from: www.pirelli.com/f1pressarea. Follow us on Twitter @ Pirelli_Media or Facebook on www.facebook.com/Pirelli For further information please contact: Alexandra Schieren +33 607 03 69 03 alexandra.schieren@pirelli.com Anthony Peacock +44 7765 896 930 anthony@mediatica.co.uk *** Francescopaolo Tarallo +39 334 684 4307 francescopaolo.tarallo@pirelli.com (Head of Product and Motorsport Communications) Pirelli Tyre Press Office Ph. +39 02 6442 4270 – pressoffice@pirelli.com – www.pirelli.com