The FIA Formula 2 Championship moves from Bahrain to Baku for the second round of the season, with more exciting racing in store on the street circuit in the capital of Azerbaijan. 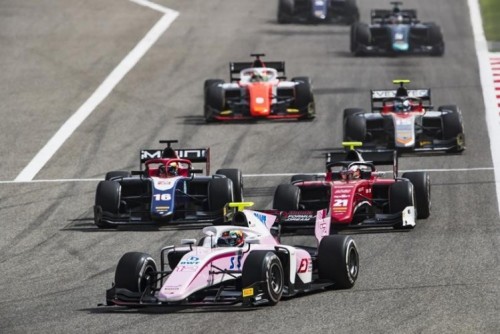 • Unusually for a street circuit, the Baku track features a very long pit straight. To maximise top speeds, teams do not run their cars with maximum downforce, meaning there is more reliance on mechanical grip from the tyres through the many corners.

• As a street circuit, there is considerable track evolution over the course of the weekend, with the available grip increasing as more rubber is laid down during each session.

• Safety cars are a frequent occurrence in Baku, meaning strategy and the timing of the mandatory pit-stop in the feature race can be crucial. Because of this, the teams also need to ensure that their strategies remain flexible enough to cater for any eventuality.

• In Baku, the P Zero White medium and P Zero Red supersoft tyres will be available, as was the case in 2017.

• Each driver has five sets of slick tyres to use over the weekend: three medium and two soft. They also have three sets of wet-weather tyres. During race one, where there is a mandatory pit stop, both compounds have to be used unless it is declared a wet race. Pit stops are optional in race two.

Charles Leclerc won the first race from pole position, after switching from the supersoft to the medium on lap seven. While the top seven finishers all followed the same strategy, Ralph Boschung came from 16th to eighth after starting on the medium tyres. Leclerc crossed the finish line first again in race two from eighth on the grid, but a penalty meant that Norman Nato won the race, in which every driver used the medium tyre.

Mario Isola, Pirelli head of car racing: “Baku provides a real challenge for the drivers and tyres, as the fastest street circuit on the calendar, and one that has witnessed a few incidents in the past: thanks also to some narrow sections and limited run-off areas. This year’s race could be quite different from last year in terms of track temperature, as it is being held much earlier in the season, so we can expect cooler weather. Unlike Formula 1, the Formula 2 sessions tend to be held in the middle of the day, which should at least mean that these track temperatures remain consistent. But there will almost certainly be a few new things to discover in these conditions and with these new cars.”