GP2 and GP3 preview: Monza 6-8 September 2013 The GP2 and GP3 drivers move from one fast circuit to another as they take on Monza, Pirelli’s home event based less than 20 kilometres from the tyre firm’s headquarters in Milan. Forming round nine of the GP2 series and the penultimate round of the GP3 series, Monza is characterised by high-speed straights and fast corners that subject the tyres to very high longitudinal forces. For GP2, Pirelli has nominated the P Zero Orange hard and P Zero White medium compounds: the two hardest compounds in Pirelli’s range of tyres, which are well placed to deal with the demands of the punishing Italian circuit. GP3 uses just one compound for the race weekend – which for Monza is the hard compound. Pirelli’s racing manager says: Mario Isola: "This is the race we’ve all been waiting for. Not only is Monza the home round for Pirelli, which makes the whole atmosphere electric, but it is also one of the most challenging circuits of the year for the tyres. Tyre degradation is generally low but there are some key areas on the circuit the drivers must watch out for such as Parabolica, which places a lot of energy on the front-left tyres in particular and can sometimes cause blistering, as well as all the long and fast straights. The hard and medium compound is the most sensible option for the GP2 crews but it still leaves room for tyre strategy with a performance gap of around 0.5 seconds per lap between the two compounds: a factor that the drivers will have to consider wisely this weekend. For GP3, the teams will use the hard compound that should give the drivers maximum grip and durability on the flat-out sections. As Monza is the penultimate round for GP3, the drivers who are still in winning contention for this year’s title will have to think of the best strategy to ensure a maximum points gain. In saying that, championships have been won and lost at Monza in the past so as always the teams will need to ensure they get their tyre management exactly right.” 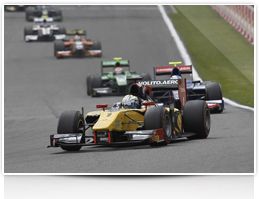 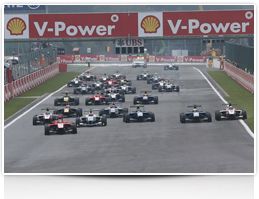 The challenge for the tyres: Monza is one of the fastest race circuits in the world and it has caught out several of the world’s best drivers over the years. It features rapid corners as well as flat-out straights, which subject the tyres to very high longitudinal forces. Blistering can also be an issue due to the stress put on the tyres under braking. There are three corners that will pose the biggest challenges: the first chicane, characterised by heavy downhill braking, the Ascari curves – with several rapid direction changes – and the famous Parabolica: a wide, open corner that puts a lot of lateral stress through the tyres. The length of the straight sections, the sustained high speeds and the force of the braking zones place a huge amount of stress on the inside shoulder of the tyre, due to the negative camber. Indeed, the combination of all three of these factors can result in the tyres heating up to 130 degrees centigrade: the peak temperatures seen all year. The race and the rules: GP2 Every car will have five sets of dry tyres and three sets of wet weather tyres available for the GP2 race weekend. The five sets of dry tyres comprise three sets of the harder compound (hard) and two sets of the softer compound (medium). The drivers can use their tyre allocation in any way they like. One set of the hard compound must be returned after free practice. Race One on Saturday is run over 170 kilometres or one hour and each driver must complete one compulsory pit stop during which a minimum of two tyres must be changed. The grid for Race Two on Sunday is determined by the finishing order of the first race, with the top eight positions reversed. Race Two is run over 120 kilometres or 45 minutes, with no compulsory pit stops. GP3 Every car will have three sets of dry tyres and two sets of wet weather tyres available for the GP3 race weekend. Only one compound is nominated (hard). The drivers can use the tyre allocation in any way they like. All the GP3 compounds carry yellow markings. There is one practice session, one qualifying session and two races in GP3. Qualifying takes place at 0945 on Saturday morning followed by Race One at 1720 (which lasts 17 laps or 30 minutes). Race Two is on Sunday at 0925 (which also lasts 17 laps or 30 minutes). The grid for Race Two is determined by the finishing order of the first race, with the top eight positions reversed. About Monza: Located just 20 minutes from Milan, Monza has been a permanent fixture on the Formula One calendar since the championship first began. Built in 1922, the GP track now stands at 5.793 kilometres in length and sees drivers with their foot on the throttle for up to 80% of the race. Last year, Luca Filippi (Scuderia Colni) and reigning GP2 champion Davide Valsecchi (DAMS) – were the GP2 winners at Monza. The GP3 winners were Daniel Abt (Lotus GP) and Tio Ellinas (Marussia Manor Racing), who both moved up to compete in GP2 at the start of the 2013 season. ________________________________________ Copyright-free videos, photos as well as latest media news are available for editorial use from: www.pirelli.com/f1pressarea (registration required). Follow us on Twitter @Pirelli_Media and @pirellisport or Facebook: Pirelli Motorsport. Please also visit the Pirelli website for more information on the company: www.pirelli.com For further information please contact: Alexandra Schieren +33 607 03 69 03 alexandra.schieren@pirelli.com Anthony Peacock +44 7765 896 930 anthony@mediaticaworld.com Francescopaolo Tarallo +39 334 684 4307 francescopaolo.tarallo@pirelli.com (Head of Product and Motorsport Communication)

PIRELLI AND THE LAMBORGHINI COUNTACH CELEBRATE 50 YEARS TOGETHER
2021 Russian Grand Prix - Preview
PIRELLI: UN GLOBAL COMPACT LEAD CONFIRMED, THE ONLY AUTOMOBILES & PARTS SECTOR COMPANY AT THE GLOBAL LEVEL
Pirelli heads to the Jerez - Angel Nieto circuit for the tenth round of the MOTUL FIM World Superbike Championship
An eventful weekend at Montmeló: three different manufacturers win in WorldSBK; Razgatlioglu takes back the leadership in the championship standings
Ducati one-two-three in WorldSBK on the podium of the Barcelona Circuit – Catalunya with Redding, Bassani and Rinaldi; Krummenacher wins in WorldSSP