->GP2 AND GP3 TYRES IN TOP FORM AT THE ‘TEMPLE OF SPEED’ IN ITALY<- Racing Engineering driver Fabio Leimer has become the new GP2 leader after a strategic battle, which centred around tyre tactics, allowed him to gain the initiative in the championship battle. Leimer started off on the P Zero White medium tyres before undercutting his rivals to change to the P Zero Orange hard tyre on lap 11, which was also nominated for Monza: the fastest race track of the year. Because of this, tyre management turned out to be crucial, with the timing of the pit stops in particular holding the key to victory. A well-thought strategy also allowed Russian Time driver Sam Bird to storm up to second place behind Leimer in the feature race after a mesmerizing sequence of laps on newer medium tyres towards the end, having started the race with the hard tyre. Leimer said: “I think my tyres were a bit better at the start because it was the softer one, so it had a little bit better traction, but I nearly stalled so I was really lucky! In the end it was the right way because it was less wheelspin, and when I saw Bird was starting on the hard I thought I have to do a good start! In the end it worked well, and with the strategy we did the opposite, but we were at the same pace: he was pushing a bit more at the end, but I think it was a really nice race.” 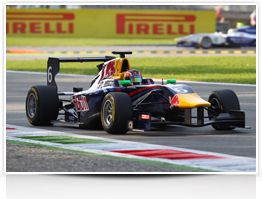 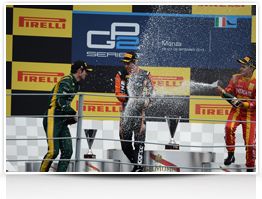 The GP2 sprint race on Sunday was won by Hilmer’s Adrian Quaife-Hobbs, who led from start to finish after getting past Caterham’s Alexander Rossi, who was on reverse pole. The Englishman used the hard tyre from start to finish, which was ideally suited to the high-energy loads and high temperatures of Monza, where track temperatures were generally in excess of 30 degrees centigrade throughout the weekend. However, during Sunday morning’s GP2 sprint race some rain started to fall on lap seven, meaning that the teams had to decide whether or not it was worth switching from slick to wet tyres. ART Grand Prix driver James Calado, who had got bogged down at the start, made the switch as he had little to lose but this turned out to be the wrong decision as the rain stopped shortly afterwards. Nonetheless, the slick tyres were able to provide enough grip for Quaife-Hobbs to maintain the lead even when conditions were extremely slippery. Equally good tyre management was shown by Daniil Kvyat for MW Arden, who claimed pole position and victory in the GP3 feature race on Saturday, running on the hard tyres to win by five seconds. His team mate Carlos Sainz was equally impressive, fighting his way up from the back of the field and looking after the tyres in the best possible way to pull off some impressive overtaking moves. In the GP3 sprint race on Sunday, Jack Harvey triumphed for ART Grand Prix for the second time this year, with Kvyat finishing second. This has closed up the championship battle to just seven points between Facu Regalia (ART Grand Prix) and Kvyat with one race remaining in Abu Dhabi at the end of the year. Pirelli’s racing manager Mario Isola commented: “The fact that the battle for the GP3 title has gone down to the wire underlines just how close and competitive the series has been this year, and we believe that our tyres have helped to achieve this through controlled degradation that helps drivers learn when it is best to push and when it is best to back off. Monza is one of the most demanding tracks of the year, both because of the high speeds and heavy braking areas, not to mention the high temperatures that characterised most of the weekend. This added plenty of variables into the strategy mix and computing those variables in the most effective way constituted the key to victory in the GP2 feature race as well. Fabio Leimer was able to use strategy very effectively in order to undercut his rivals and built up an advantage that he was never to lose, through trying something a little bit different to his direct rivals. As was the case in Formula One, we enjoyed a huge amount of home support at Monza and we are extremely grateful for that.” The fight for the GP2 crown will continue in Singapore in two weeks time (20-22 September). Ends Copyright-free videos, photos as well as latest media news are available for editorial use from: www.pirelli.com/f1pressarea (registration required). Follow us on Twitter @pirellisport or Facebook: Pirelli Motorsport. Please also visit the Pirelli website for more information on the company: www.pirelli.com. For further information please contact: Alexandra Schieren +33 607 03 69 03 alexandra.schieren@pirelli.com Anthony Peacock +44 7765 896 930 anthony@mediaticaworld.com Francescopaolo Tarallo +39 334 684 4307 francescopaolo.tarallo@pirelli.com (Head of Product and Motorsport Communication)