A hot afternoon of racing in every way saw Marco Melandri (Yamaha World Superbike Team) and Max Biaggi (Aprilia Alitalia Racing Team) trade wins and second place finishes to squeeze the title leader Carlos Checa (Althea Racing) in the overall points standings. The Spanish rider fell in race one at his home track and then took a well-deserved podium place, third, in race two. Checa, desperate to make amends for sliding off as he chased the leading duo in race one, had to work hard to keep Michel Fabrizio (Suzuki Alstare) behind him for much of the race and Checa’s 16 points for third place mean that Biaggi is still 43 behind and Melandri is 66 adrift as the season clicked past its mid-point today. 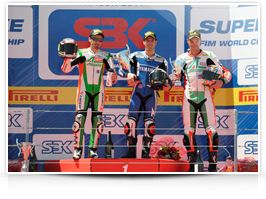 “Racing at a new track like Motorland Aragón with the longest straight of the championship, elevation changes and truly extreme braking points is very exciting and challenging for a tyre supplier. To guarantee fast racing and longevity of performance, Pirelli furnished a total of 4300 tyres consisting of 3 front and 4 rear solutions for WSBK and 3 front and 3 rears for SSP. WSBK tyre options included the standard mid-soft (SC1), and a new for 2011 mid-soft (SC1) rear tyre both presented at and winning Race 2 of last week's San Marino round. Additionally, Pirelli’s medium (SC2) from World Endurance and SC3 rear tyres were present in case of an over abrasive track. Front WSBK tyres included the standard SC1 and development soft (SC1) along with a mid-soft (SC2) front. At this first ever Alcaniz round, most riders opted for the standard mid-soft “B” rear tyre for Race 1, with the exception of Biaggi (Aprilia) and Melandri (Yamaha) who chose the development “A”, or SC1 tyre, as well as Checa (Ducati) who opted for the harder SC2 rear tyre and set a Pirelli Best Lap of 1'58.862 before crashing out. Biaggi (Aprilia) demonstrated confidence in the new mid-soft, having registered lap times in the 1'57s during the Superpole. Nine riders switched to the new mid-soft rear for Race 2 with an asphalt temperature peaking to 53°C; Fabrizio (Suzuki) benefitting strongly from this change with a jump from 11th to 4th position, and both Melandri (Yamaha) and Biaggi (Aprilia) who lapped consistently in the 1'59s throughout the middle part of the race. Supersport riders were also content with the mid-soft SC1 front and rear tyres, as it was the choice of all three manufacturers on the podium: Davies (Yamaha), Lowes (Honda) and Salom (Kawasaki); the Diablo Supercorsa tyres helping Lowes to earn his second Pirelli Best Lap and Salom to obtain his first podium. Interesting note also from the Stk1000, where the gap between Giugliano's (Ducati) fastest lap of 2'01.589 and his slowest (10°) was just 0.66 secs, demonstrating real consistency of the Diablo Supercorsa SC2 in such hot conditions. We look forward to our return to Aragon for a continuation of this excellent tyre development. ” - Giorgio Barbier, Racing Director, Pirelli Moto Pirelli BEST LAP Awards: SBK Race 1 – Carlos Checa (Althea Racing), 1'58.862 (Lap 7) SBK Race 2 – Marco Melandri (Yamaha World Superbike), 1'59.159 (Lap 3) Total BEST LAP (SBK): Checa C. (Althea Racing): 6, Biaggi M. (Aprilia Alitalia Racing): 3, Haga N. (PATA Racing Team Aprilia): 1, Sykes T. (Kawasaki Racing Team Superbike): 1, Camier L. (Aprilia Alitalia Racing): 1, Fabrizio M. (Team Suzuki Alstare): 1, Melandri M (Yamaha World Superbike): 1 WSS – Sam Lowes (Parkalgar Honda), 2'02.785 (Lap 6) Total BEST LAP (WSS): Foret F. (HANNspree Ten Kate Honda): 2, Lowes S. (Parkalgar Honda): 2, Scassa L. (Yamaha ParkinGO Team): 1, Davies C. (Yamaha ParkinGO Team): 1 Stk1000 – Niccolò Canepa (Lazio MotorSport), 2'01.565 (Lap 2) Stk600 – Jed Metcher (MTM-RT Motorsports Team), 2'05.91 (Lap 2) Spanish riders had some good and the occasional not so good results all round, with Joan Lascorz (Kawasaki Racing Team) posting seventh in race one then finishing an season best equalling fifth in race two. Irish rider Eugene Laverty (Yamaha World Superbike Team) put in a fourth and a sixth place today, to remain fourth overall. This weekend WSB legend Noriyuki Haga (PATA Racing Team Aprilia) took part in his 300th race and left with strong results of sixth and seventh to his credit. Tom Sykes equalled fellow Kawasaki rider Lascorz’ prowess with fifth in race one, but a fall in race two spoiled an otherwise consistent and competitive weekend, as the whole Kawasaki effort took another step up with their new bike. 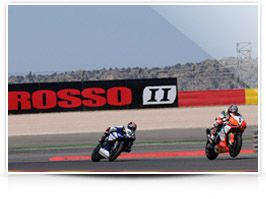 Once more it was a tough weekend for the BMW riders, this time from both official and satellite teams, with Leon Haslam (BMW Motorrad Motorsport) scoring two ninth places and Ayrton Badovini (BMW Motorrad Italia SBK Team) was eighth and tenth. The worst experience of all came for the luckless Troy Corser (BMW Motorrad Motorsport) as an entirely accidental collision between him and Maxime Berger caused Troy’s left radius and ulna to fracture, putting him out of action in race two. He had been tenth in race one. 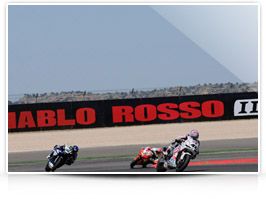 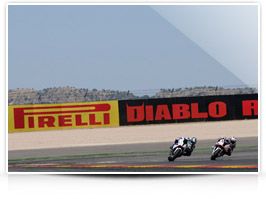 Race 1 Melandri took his second win of the year after leading when it really counted as his rival Biaggi made a small slip a few laps from the end. The margin of victory was 1.5 seconds. Camier was a strong finisher in third, and Laverty took fourth place in a close fight with Sykes. Haga and Lascorz followed close behind those two. Checa fell while in a potential podium position, on lap eight. He had just set the fastest lap of the race and was pushing on to try and stay with the leading riders. Marco Melandri: “It’s been an awesome race for me. Max was strong and consistent at the start and it was difficult to follow him. But in the end it was going to be tough for me to pass him so thanks to him that he made a mistake! Otherwise it would have been difficult. The team has been working very hard and I was very confident all weekend.” Max Biaggi: “I cannot say I am super-happy for the result but I had a good rhythm and just at the end the bike was a little more difficult to ride. We need to work more on the bike to improve it towards the end of the race, and hopefully we can do that for race 2.” Leon Camier: “I was struggling a bit at the beginning to get into the rhythm, but I’m happy with the result and happy for Aprilia, everyone’s worked hard this weekend. It’ll now make me try and go better at the beginning of the next race really.” Results: 1. Melandri M. (ITA) Yamaha YZF R1 40'01.968 (160,189 kph); 2. Biaggi M. (ITA) Aprilia RSV4 Factory 1.572; 3. Camier L. (GBR) Aprilia RSV4 Factory 2.432; 4. Laverty E. (IRL) Yamaha YZF R1 10.799; 5. Sykes T. (GBR) Kawasaki ZX-10R 10.847; 6. Haga N. (JPN) Aprilia RSV4 Factory 11.931; 7. Lascorz J. (ESP) Kawasaki ZX-10R 12.591; 8. Badovini A. (ITA) BMW S1000 RR 16.954; 9. Haslam L. (GBR) BMW S1000 RR 24.205; 10. Corser T. (AUS) BMW S1000 RR 24.694; etc. 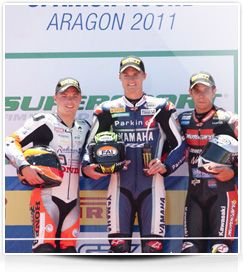 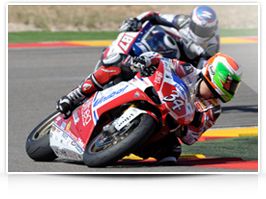 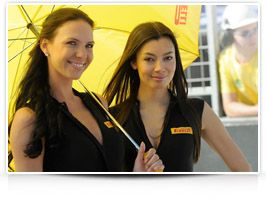