NEW WINNERS FOR PIRELLI AT GP2 AND GP3 IN MONACO 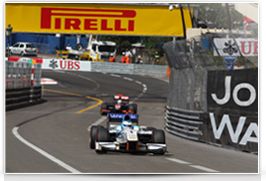 Monaco hosted the GP2 and GP3 series together for the first time, with Pirelli bringing more than 1300 tyres for the two junior series. The GP2 Series featured some new tyre rules in Monaco, with drivers allowed two sets each of the harder and the softer tyres (as opposed to three sets of the harder tyres and one set of the softer tyres). After Monaco the usual allocation applies again, but another new regulation was introduced at Monaco that will remain: teams can use their tyre allocation in any way they like, at any point over the weekend (previously, they had to save one set of the harder tyres for the sprint race). In Monaco, the GP2 drivers were given the soft and the supersoft tyres – just like their Formula One counterparts. The supersoft tyre, just under a second per lap quicker than the soft tyre, was the default choice for the half-hour qualifying session, which was split into two groups. At the start of the session, held on Thursday afternoon, the track was much more slippery than it was at the end of the session, meaning that it was constantly evolving. Barwa Addax driver Johnny Cecotto found the most pace at the very end of the session, setting a time that was 0.6 seconds faster than his rivals. As is often the case in Monaco, he converted that pole position into a victory at the feature race, which involves a compulsory pit stop. Cecotto used the supersoft tyre for both stints, changing just the rears during his pit stop on lap 23 to save time. Championship leader Davide Valsecchi adopted a similar strategy for DAMS and made up three places to extend his advantage by stopping with 17 laps to go. An early pit stop didn’t quite work out for Lotus driver James Calado although he still finished seventh, while Coloni driver Stefano Coletti tried a different strategy, starting the race on the soft tyre before changing all four wheels to the supersoft. 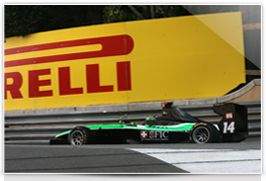 The second race on Saturday afternoon – with the grid formed by the top eight in race one – was characterised by a multiple collision in the early stages that eliminated a number of drivers including Valsecchi. Jolyon Palmer (iSport) moved from third to first on the opening lap and then went on to claim his first victory. Like all of the leading runners, he used the P Zero Red supersoft tyre for the sprint race. The GP3 tyre rules remained unaltered, with three sets of a single slick compound available for the weekend. For Monaco, the GP3 soft tyre was nominated. Finnish driver Airo Vainio was quickest in qualifying and won the opening race for Lotus on Friday morning. Under the reverse grid rules, he started eighth for race two on Saturday afternoon. The second race was stopped four laps early, following an accident for Lotus driver Conor Daly, from which he emerged uninjured. With repairs to the safety barrier anticipated to take too much time, Status driver and pole-sitter Marlon Stockinger was declared the winner, having absorbed plenty of pressure from Antonio Felix da Costa (Carlin). Pirelli’s racing manager Mario Isola said: “Monaco has a reputation for springing a surprise, and it was great to see so many new winners this weekend in GP2 and GP3. The two winners in GP2 are both the sons of former Formula One drivers, and in GP3 Vainio and Stockinger are very deserving winners as well. The new tyre rules have created an extra element in GP2, and we saw both the performance and the durability of the supersoft compound amply demonstrated. While the supersoft is resilient enough to last for an entire race, it develops its best performance over only two or three laps, meaning that it needs to be managed carefully during qualifying in particular. The winning strategy of changing just the rear tyres also means that drivers have to be very aware of looking after the fronts, especially at the beginning of the race when the cars are full of fuel. The same applies to GP3: while there are no pit stops it is still important for the drivers to know how to look after the tyres. In Monaco it’s impossible to get away with making any mistakes, so having the maximum precision and control is even more important than usual.” The GP2 and GP3 Series both resume at the Grand Prix of Europe in Valencia from 22-24 June. Copyright-free video news releases featuring interviews with Paul Hembery, as well as the 2012 media guide, photographs and press releases are available for media use from: www.pirelli.com/f1pressarea  (Login: PirelliPressArea - Password: PirelliMedia). Follow us on Twitter @ Pirelli_Media or Facebook on www.facebook.com/Pirelli   For further information please contact Alexandra Schieren +33 607 03 69 03  alexandra.schieren@pirelli.com Anthony Peacock +44 7765 896 930  anthony@mediatica.co.uk ** Francescopaolo Tarallo +39 334 684 4307 francescopaolo.tarallo@pirelli.com (Head of Product and Motorsport Communications)

NEW WINNERS FOR PIRELLI AT GP2 AND GP3 IN MONACO
Newsroom