Pirelli at Jerez de la Frontera, Spain, for the penultimate round of the 2016 MOTUL FIM World Superbike Championship

The Italian tyre manufacturer returns to the Andalusian circuit, which this year might decide the 2016 champions, for the fourth consecutive year by proposing to Superbike riders four solutions for the front and three for the rear tyre 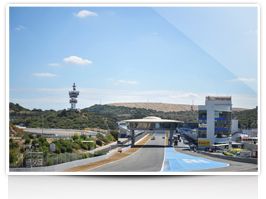 The MOTUL FIM World Superbike Championship returns to Spain for the second time in 2016: after Motorlánd Aragón round in early April, the production derived machine series arrives in Andalusia for the twelfth round of the season, to be held from October 14th to 16th at Jerez de la Frontera Located in the capital of flamenco, in a land marked by a strong link with motorsport world, Jerez de la Frontera circuit was inaugurated in December, 1985. With a length of 4218 metres, it was created with the intention of hosting events on two and four wheels in a modern and secure facility. In fact the circuit is in the same area where in the Sixties the famous Nuestra Señora de la Merced Trophy was held, as a competition organised on a street circuit. Since its opening, the Andalusian track of Jerez has become a favourite with riders, to the point that in 1992 the owners decided to start renovations and modernisation works to improve its safety. In this way the track was subjected to some changes, especially at the Sito Pons corner and the Senna chicane, bringing the length of the lap to 4223 metres. Ten years later, in 2002, some extensive restructuring efforts were made to the overall complex, such as pit lane lengthening and the construction of surfaced run-off areas. 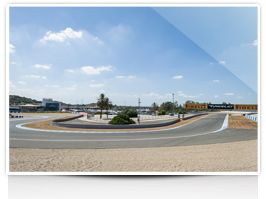 Completely resurfaced in 2008, Jerez circuit presents a varied composition, with long straights – equal to 69% of the circuit – and slow corners alternating with quick sections. The finish straight, which is 600 metres long, has a width equal to 12 metres, slightly wider than the rest of the track, where the width is 11 metres. As well as the structure, also the curvature radius is variable, ranging from 30 to 116 meters, while the maximum gradient is 5% out of Turn 5. There are several slopes with the maximum of 7.46% out of Turn 2, 6 and 13, while the minimum is 4.70% out of Turn 4 and 12. The FIM World Superbike Championship made its debut on the Andalusian circuit in 1990, with a double win signed off by Raymond Roche, who eventually graduated to World Champion at the end of the season. After twenty-three years of absence, the world’s leading competition for production derived machines returned to Jerez in 2013, where  Tom Sykes (Kawasaki Racing Team) conquered the title. Last year Tom Sykes (Kawasaki Racing Team) won Race 1 ahead of Chaz Davies and Michael Van Der Mark, while Race 2 was conquered by Chaz Davies (Aruba.it Racing – Ducati SBK Team) ahead of Jordi Torres and Leon Haslam. In the Superbike class, the challenge for the title is still potentially open between Jonathan Rea (Kawasaki Racing Team), first with 426 points, Tom Sykes (Kawasaki Racing Team) with 375 and Chaz Davies (Aruba.it Racing – Ducati), who is third with 345. Even the Manufacturer’s Championship is not mathematically assigned yet, with Kawasaki first with 502 points, followed by Ducati with 417. A similar situation in Supersport, with Kenan Sofuoglu arriving at the Spanish round with 171 points and a 42 point lead over teammate Randy Krummenacher. The last round scheduled for the 2016 season in the Superstock 1000 class will see the final battle between Leandro Mercado and Raffaele De Rosa, with the Argentinian having a slight advantage in the Championship (111 points against 104 points of the Italian rider). The solutions for Superbike and Supersport classes Continuing with its development activities, last year Pirelli brought to Jerez some solutions which helped improve the race duration by approximately six seconds, compared to 2014. For the next round, the penultimate one of the 2016 season, the house of the long P logo has identified four slick DIABLO™ Superbike solutions for the front and three for the rear tyre for Superbike class riders. For the front, riders can rely on two SC1 development options: the well-known S1699, the most widely used last season, as it offers greater support in the cornering approach and a better riding precision, and U0176, developed with a compound that is positioned midway between the SC1 and SC2, and which saw its debut at the Dutch circuit of Assen. The other two options available are the SC2 range one, which is the ideal for high external temperatures, as it ensures solidity to the tread pattern, and the SC3 standard, which was introduced starting from this year and provides a compound which is particularly resistant. Three solutions are available for the rear tyre; the SC0 range, great to deal with high temperatures like those seen at Jerez last season, the SC0 development V0377, which should offer a higher level of grip and high stability thanks to its structure which differs from the range version, and the SC1 development V0007, which presents the same compound of the SC1 standard but adopts different technological solutions. Together with the intermediate solution DIABLO™ Wet range, used with excellent results by Chaz Davies who conquered Race 1 at Magny-Cours, in case of rain the Superbike class riders will be able to count on the DIABLO™ Rain solution for the rear and two for the front. In addition to the range one, Pirelli nominated also the SCR V0830 development solution, which was already used by many riders during Race 1 at Magny-Cours, where it made its debut. Pirelli at Jerez de la Frontera, Spain, for the penultimate round of the 2016 MOTUL FIM World Superbike Championship
Newsroom