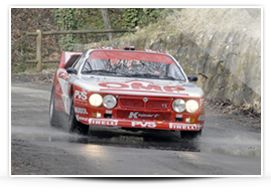 Sanremo was the second round of the FIA European Historic Rally Championship, with the previous round being won by Pirelli as well. Two-time world rally champion Carlos Sainz (who clinched both his titles with Pirelli) won the opening round in Spain, at the wheel of a Porsche 911, just as he did last year. The result puts Pirelli in the lead of both the FIA European Historic Rally Championship with Pedretti and the Italian Historic Rally Championship with Musti. Both cars used Pirelli’s P7 Corsa Classic rally tyre: a tyre that combines the retro look of the Group B era with the very latest technology. The P7 Corsa classic means that even the most fearsome period rally cars can be driven with the safety and control of the modern era. The tyre is available in one pattern and three different compounds to suit dry, wet and mixed conditions, in the same sizes that were made originally. Conditions were extremely tough for Sanremo, with fog, rain and damp surfaces characterising the action. Pirelli’s tyres made the difference thanks to the W5 compound for wet conditions, which the drivers all tried for the first time. This gave them the confidence to push hard even on the most slippery asphalt surfaces. Pedretti was the first driver to use the W5, on the second special stage, which allowed him to pull out a lead over other cars using medium compound dry weather tyres. Leg two was dominated by ex-Formula One driver Erik Comas, who demonstrated the adaptability of the W5 in mixed dry and damp conditions to set some extremely fast times with full confidence on the unpredictable roads in his Lancia Stratos. Around 70% of the field used Pirelli tyres, underlining the fact that the Italian rubber was the equipment to have. Gabriele Noberasco made his eagerly-awaited debut with the Group B Audi Quattro, which did not use Pirelli. Despite the fact that the conditions were ideal for a four-wheel drive car, he wasn’t able to break into the frontrunners. The last Sanremo victory for the Lancia 037 dates back to 1983, when flying Finn Markku Alen – the “original maximum attack” – led home an 037 one-two-three, ahead of his team mates Walter Rohrl and Attilio Bettega. All the factory Lancias used Pirelli. Pirelli’s product manager Terenzio Testoni concluded: “This event marks a significant anniversary for Pirelli, during which our acclaimed P7 Corsa Classic tyres made the difference from start to finish. In all conditions, our tyres dominated the action, giving the drivers confidence despite the slipperiness of the road and the ferocity of their amazing cars.” For more information about Pirelli, please contact Anthony Peacock on +44 7765 896930 or anthony@mediaticaworld.com