Pirelli GP2 tyres perform strongly in the heat of Bahrain 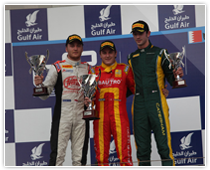 Pirelli’s hard and soft tyres have performed well in the heat of Bahrain, demonstrating top performance allied to complete reliability. With track temperatures in excess of 40 degrees centigrade, these are toughest conditions that the GP2 tyres have faced yet, on the second round of this year’s series. The nomination of P Zero Orange hard and P Zero Yellow soft was exactly the same as it was for the opening round in Malaysia, but conditions were extremely different. Traction and braking meant that the rear tyres in particular had a big job to do, especially at the start of the race on full fuel. The nomination for GP2 in Bahrain was once more an even more extreme selection than the compounds chosen for Formula One (hard and medium), which underlines the adaptability of the GP2 rubber under a very wide range of conditions. Each driver has an allocation of three sets of the harder compound and two sets of the softer compound in GP2, which they can use in any way they want. Racing Engineering driver Fabio Leimer set the pace from the very first free practice session on the hard compound, going a full second quicker than anybody else. In qualifying, Leimer again dominated: lapping nearly two seconds faster than his free practice time on the soft tyres and nine-tenths faster than anybody else. This illustrated the constant track evolution seen in Bahrain, a well-known feature of the track that makes grip levels very hard to predict. During the feature race, a number of different strategies were at work. The frontrunners mostly chose to start on the soft tyre, with some of the drivers further down the grid electing to start on the hard tyre in order to drive a longer first stint and get in front of the drivers who were running on the soft tyres during the first pit stops. On lap seven, Caterham’s Alexander Rossi was the first driver to stop for hard tyres on lap six. MP Motorsport driver Adrian Quaife-Hobbs was the last person to make a pit stop, having started the race from eighth on the grid on the hard tyres and then switching to soft tyres on lap 19 of 32. 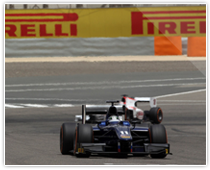 His strategy helped Rossi jump from seventh on the grid to claim his first GP2 podium on his series debut, while Leimer dominated from lights to flag after fending off a determined Stefano Coletti (Rapax), who finished second. Both started on the soft tyre and switched to the hard tyre on lap 10. Another driver who used strategy to boost his track position was Carlin’s Jolyon Palmer, who stopped on lap seven to go from softs to hard and complete a long final stint – eventually finishing fifth from a starting position of 14th. The sprint race on Sunday didn’t feature compulsory pit stops, with the grid formed of the top eight from Saturday’s race reversed. This meant that Russian Time driver Tom Dillman (the winner of the Bahrain sprint race last year) started from pole. In the end though, it was his team mate Sam Bird who won the race, having managed his single set of P Zero orange hard tyres perfectly from start to finish in the 23-lap race. Coletti made a brilliant start to move up to second place by the closing stages of the race, but he then found himself struggling with degradation, which allowed Carlin’s Felipe Nasr past him. The Brazilian then chased Bird all the way to the chequered flag, finishing just 0.08s behind. After clinching victory, Bird commented: “I knew Coletti and Nasr would come back at me because their cars are typically very strong in terms of tyre management. We’re still working on our setup and improving all the time. And we’re already improved a lot since yesterday where our tyres fell off earlier. We have managed to add quite a few more laps today and we won the race.” Pirelli’s racing manager Mario Isola commented: “Controlling the thermal degradation was the key to success during this race weekend, which was held in the highest temperatures that we have seen so far this year. Tyre strategy played an important role in the outcome of both races, just as is the case in Formula One – which is where this generation of talented drivers all want to be, so hopefully we can help to prepare them. Fabio Leimer and Racing Engineering quickly understood how to get the best out of both the hard and the soft tyre on a single lap as well as over a whole stint during the race. Coupled with the right strategy, this allowed them to win the feature race. The sprint race focuses even more on tyre management, as a single set has to last an entire race distance. The top three all judged the compromise between durability and performance perfectly, treating us to an extremely closely-matched and exciting spectacle.” This year’s GP2 season takes in 11 rounds and 22 races. The next round of the Pirelli-equipped series takes place in Barcelona, Spain, from May 10-12. *** Copyright-free videos, photos as well as latest media news are available for editorial use from: www.pirelli.com/f1pressarea (registration required). Follow us on Twitter @Pirelli_Media and @pirellisport or Facebook: Pirelli Motorsport. Please also visit the Pirelli website for more information on the company: www.pirelli.com. For further information please contact: Alexandra Schieren +33 607 03 69 03 alexandra.schieren@pirelli.com Anthony Peacock +44 7765 896 930 anthony@mediaticaworld.com Francescopaolo Tarallo +39 334 684 4307 francescopaolo.tarallo@pirelli.com (Head of Product and Motorsport Communication)