For the seventh round of the Championship the Italian tyre company seeks confirmation in Superbike with development solutions already used in previous rounds, while introducing three new options in Supersport, (one front and two rears)

On the Monday after the races the second official test of the season, where Pirelli development teams will try some new tyre solutions

The eni FIM Superbike World Championship arrives at the halfway point of the season with the seventh round that will take place starting from tomorrow at the Autódromo Internacional do Algarve in Portimão, Portugal, which hosts the Championship for the eighth consecutive year. Pirelli supplies for the premier class solutions already well known and successfully used during the year, among them both standard and development tyres. For the Supersport class there are several new development solutions available to riders who will have a new front and two new rears to test and eventually use in the race. The Portuguese event will not end on Sunday with the conclusion of the races. For Monday holds the second scheduled official test, after Australia at the beginning of the year. For the occa

sion, Pirelli will ask the development teams to test some development tyres, comparing them with standard and frequently used tyres. Portimão VS tyres: ups and downs and changes of direction demanding on tyres The Autódromo Internacional do Algarve was inaugurated in 2008 by architect Ricardo Pina. The track is 4592 metres long with a finish straight which has a length of 835 metres, nine right-hander and six left-hander curves and a long turn radii that goes from 23 metres to a maximum of 207 metres. The rider in pole position starts from the right side of the track. Initially the circuit, because of the new asphalt, offered a lot of grip and was aggressive and had to be covered with tyres with very high mechanical resistance to prevent tearing of the tread surface and to minimise removal of the compound due to friction. In recent seasons the asphalt of the Portuguese circuit has gradually lost its aggressive character, greatly smoothing out its harshness on the tyres and losing some of its natural grip. In the last two years the race was held between June and July in some cases with elevated track temperatures, a situation in which the softest solutions struggled for grip. This track is one of the circuits which enhances the tyre's capacity to work in very different conditions. Specifically, the most challenging part for tyres is the last turn which is 350 metres long and takes 6.5 seconds to navigate, and due to the wide turning radius (about 150 metres), the bike is in constant acceleration and goes from 150 to 250 kph at a lean angle of about 50°. So there is a remarkable increase in temperature on the side of the tyre affected by the lean, particularly for the rear tyre which must withstand the high temperature while simultaneously ensuring strong lateral force and allowing the bike to accelerate. High running times and fixed lean angles can therefore generate much wheelspin and significant peaks in localised temperature at 45-50°C on the tyre shoulder. The weakening of the compound due to heat, even with smoother asphalt, causes significant levels of material removal. For this reason a significant amount of tyre wear can often by noted at the end of the races.

The curves 5, 8, 11, 13, and 14 have on the contrary a very tight radius (about 30 metres), which forces the rider to brake to an extremely low speed. Halfway through the turn the bike needs the rear tyre, which is very cold, to provide strong longitudinal acceleration up to 1G at a lean angle of 50°. The tyres are particularly cold, especially coming into the left handers (numbers 5 and 13). The riders that can accelerate a little before may gain an important advantage. The rear tyre must go from low to extremely high temperatures, the front one must be able to come into the turns mentioned above quickly and precisely. At the end of the straight stretch over the finish line, the first turn with the 100 metre radius which allows the riders to hold speeds greater than 100 kph, the front tyre is particularly stressed because it has to travel about 80 metres at a lean angle and with the rider on the brakes. Given the time of the year we are going to race, which is close to the summer, it is important that the riders are able to evaluate these aspects when selecting the rear tyre: compound grip, wear resistance, elasticity of the tyre in the heat (to prevent de-compaction effects), movement in running and loss of support. Unlike the rear, which undergoes few but intense mechanical/thermal stresses, the front is always engaged in slow turns and turns with quick entry and small curvature radii which force the rider to brake sharply, even going downhill. Generally wear problems are not an issue on the front tyres, but the important aspect to consider is how the front withstands the heat (a must for good precision), particularly when coming into the first turn. The Pirelli solutions for Superbike and Supersport classes: For this event which marks the halfway point of the 2015 season, Pirelli has brought to Algarve a total of 4433 tyres, necessary for Superbike, Supersport, Superstock 1000, Superstock 600 and European Junior Cup classes. Each Superbike rider will have 34 front tyres and as many at the rear, while for the Supersport riders the quantity is 25 front and 26 rear. In the premier class all the riders can rely on three dry solutions for the front and the same amount for the rear in addition to the intermediate and wet tyres and to the rear qualifier tyre which can be used only in the two sessions of Superpole on Saturday. 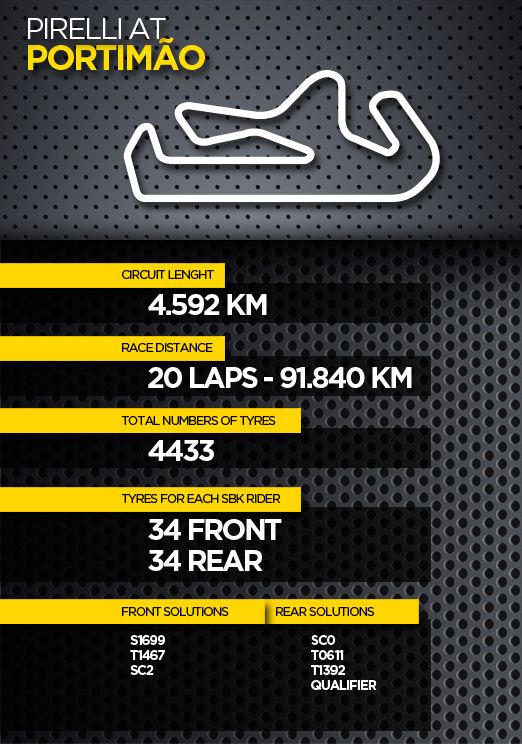