The trophies depict a lightning bolt and are the result of a collaboration between the Pirelli HangarBicocca, a contemporary art museum, with the Italian artist

Pirelli, as title sponsor of this weekend’s Gran Premio del Made in Italy e dell’Emilia Romagna that takes place in Imola, will also supply the race trophies created by artist Alice Ronchi.

These trophies were made by the Italian artist selected for this project thanks to her collaboration with Pirelli HangarBicocca: a non-profit foundation dedicated to the production and promotion of contemporary art, established in Milan in 2004 from a converted warehouse.

The title sponsor at every race is able to choose the trophies given to the drivers on the podium, and Pirelli – a company always proud to highlight its origins – has decided to celebrate Italian art.

The trophies, which are really innovative in terms of conception and symbolic aspect, depict a lightning bolt and were made in the artist’s studio using aluminium, before being mirror-polished. The creative process included digital modelling of the eventual form, 3D 1:1 printing and wax casting in a foundry. According to the artist herself, the trophy was inspired by the beauty of a 1950s racing car and the landscape of Imola. The artist chose to focus on history as well as what she identified as the prevalent theme of Formula 1: power.

Alice Ronchi said: “I saw the lightning bolt as a symbol of power, speed, tension, and force. And this goes right back to the principal icons that inspired this work: Zeus, the gods, and ancient Greece. Hopefully, this trophy delivers a new narrative aspect. Through an interpretation of aspects that sum up the driving forces behind every grand prix, as well as the use of the lightning bolt and the reference to the myth of Zeus, I wanted to convey a story told in the most expressive way possible.”

Alice Ronchi, born in 1989, lives and works in Milan. She gained her BA at Milan’s Nuova Accademia di Belle Arti (NABA) in 2012, and her MA at the Sandberg Instituut in Amsterdam in 2015. Currently she is teaching at the Nuova Accademia di Belle Arti (NABA) in Milan.
In her works, everyday objects meet the world of invention and fantasy. The search for wonder is a constant theme in her work, populated by familiar yet enigmatic figures, that are re-worked in an abstract way. Somewhere between playful and minimalist, her work can be defined as a perfect synthesis between simplicity of expression and complexity of forms and meanings. 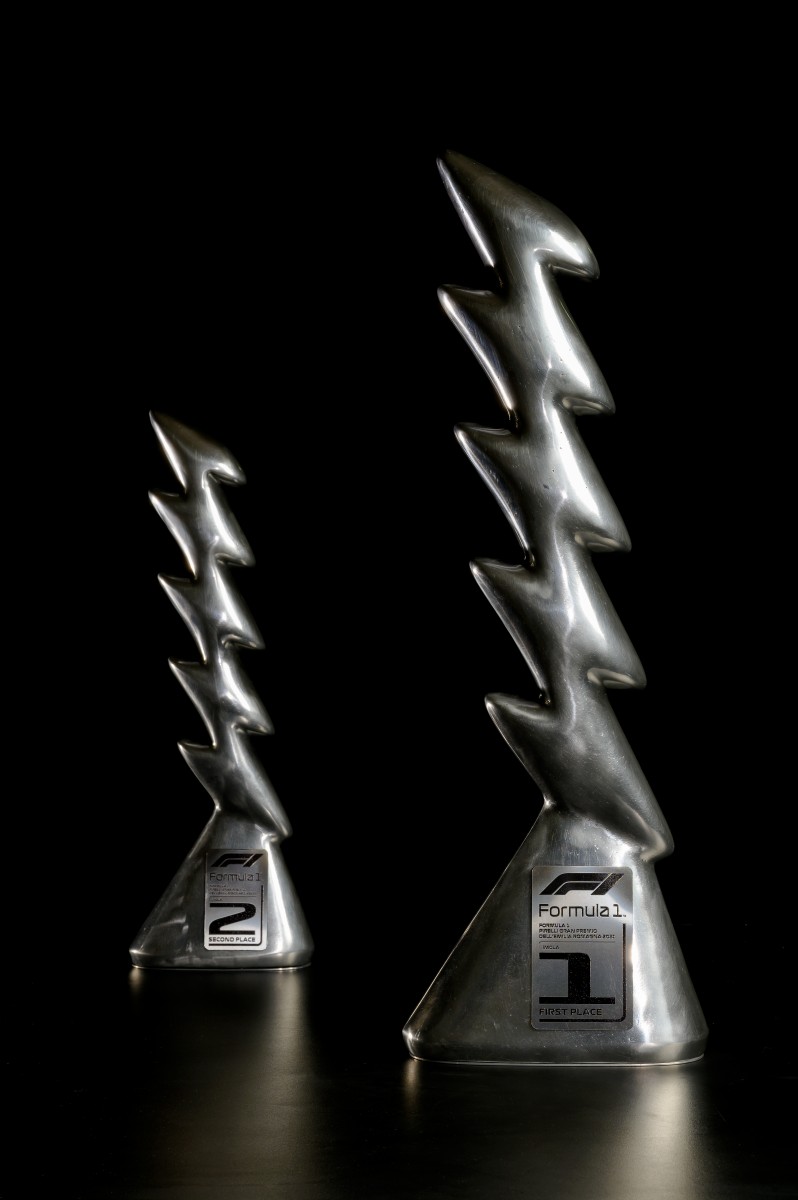