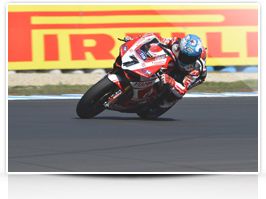 After the positive seasonal début in February in Australia where average race lap times were reduced by 1 second compared to 2012, the new Pirelli tyres return to Spanish soil, where in 2012 Superbike riders tried them for the first time during a testing session to compare the racing performance with the old 16.5" tyres The new Pirelli Diablo Supercorsa SC tyres make their début, already used last year by Supersport riders and in the Superstock 1000 FIM Cup and Superstock 600 UEM European Championship After the racing début at the end of February on the Australian Phillip Island track, the new Pirelli Diablo Superbike 17 inch tyres return to Spain, to Motorland Aragón, where last year they were tested for the first time by the Superbike riders during sessions held the Monday following the race weekend. In Australia, beyond the excellent times that were put on the boards, a realistic comparison with the 16.5 inch predecessors was not possible due to the new asphalt. Therefore, the conditions the 17" tyres are called on to tackle at Motorland Aragón will constitute the first direct comparison with the Diablo Superbike tyres used until last year. The first European round of the eni FIM World Superbike Championship will take place this year on the Motorland Aragón track from 12 to 14 April. La Ciudad del Motor de Aragón, better known as Motorland Aragón, is a race track located in Alcañiz a town in the Spanish community of Aragona with the same name. 5,344 m long, the track was designed by the well known German architect Hermann Tilke and opened in 2009. It has hosted the World Superbike Championship since 2011. 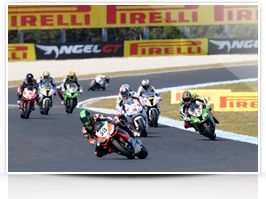 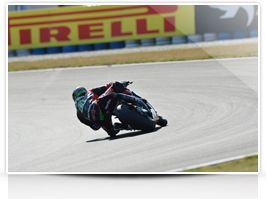