After winning both 2015 and 2016 comparative tests organised by the German magazine Motorrad, more satisfaction comes for SCORPION™ Trail II which, with the victories in the comparative tests promoted by the French publication and the Italian online magazine, keeps the award of number one tyre in its segment 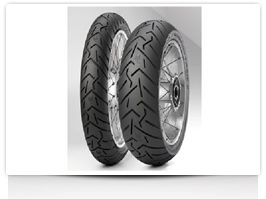 These were two overwhelming victories for SCORPION™ Trail II, which was launched on the market by Pirelli in 2015. Both magazines have compared Pirelli tyres with those which are considered its best competitors available on the market: Bridgestone Battlax Adventure A40, Dunlop Trailsmart, Metzeler TOURANCE™ Next, Continental Trail Attack 2 and Michelin Anakee III. The superiority of SCORPION™ Trail II was so evident that the French magazine testers declared: “We were really impressed by the Pirellis – and the expression is not exaggerated – about their behaviour and braking on wet”. Also Stefano Cordara, tester of Red-Live.it, does not spare praise for the SCORPION™ Trail II: “It’s a wonderful product in terms of balance and grip (the rear tyre is bi-compound). Among the tested tyres these have the best balance between grip and profile between front and rear, leaving the bike magnificently neutral... These tyres let you go stronger with the smallest psychological effort. The perceived comfort is great, and the noise low. The warm-up time is immediate”. (Full article available at: http://red-live.it/moto/pneumatici/confronto-pneumatici-enduro-street) 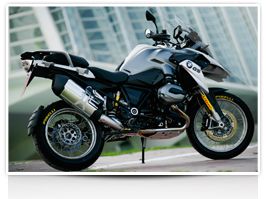 Since the maxi enduro/crossovers are the most popular bikes in the market and in recent years have increased their performance becoming more demanding in terms of performance on asphalt, it’s natural that both Moto Magazine and Red-live.it have taken as reference sizes the tyres mounted on these motorcycles, using in both cases for their tests two BMW models, the R 1200 GS and the R 1200 GS Adventure, as reference bikes. The comparative test promoted by Moto Magazine, available at newsstands from today, was made at the French circuit of Fontange (Bouches-du-Rhône), owned by Michelin, and it has taken into account factors such as handling, wet behaviour, grip on low friction surfaces, traction and braking distance both in wet and dry conditions. To each of these criteria was assigned a mark in stars from 1 (very poor) to 5 (excellent) that contributed to the final score. Here below the final ranking drawn up by the French magazine: 1) Pirelli SCORPION™ Trail II 2) Bridgestone Battlax Adventure A40 2) Dunlop Trailsmart 3) Metzeler TOURANCE™ Next 3) Continental Trail Attack 2 3) Michelin Anakee III SCORPION™ Trail II has achieved the top score in the traction aspect and in the grip on low traction surfaces as well as wet behaviour and braking distance in the wet. In particular SCORPION™ Trail II was able to stop in the wet a BMW R 1200 GS launched at 80 km/h four metres earlier than the Continental Trail Attack 2 did (33,6 metres VS. 38 metres). Also it was nearly 2.5 metres before the Michelin Anakee III (33,6 metres VS. 35,9 metres). The braking distance value can of course make a real difference on the road. The final result obtained by Red-Live.it was similar, which awarded Pirelli SCORPION™ Trail II with the Palme d’Or as the best enduro street tyre at the end of their comprehensive test. The test was carried out on a mixed route of 15 km and at Vizzola Ticino track, which was flooded artificially to measure the tyre wet behaviour. Among the parameters taken into account for the final ranking: the tyre’s ability to absorb road bumps and not to defer them to the chassis (kickback), the straightening effect that all the bikes have when braking with the front brake while the bike is folded (“stand-up braking” effect), handlebar movement that is usually felt in deceleration (shimmy), the tyre grip offered when the bike is turning (edge grip), any loss of adhesion (perceptible in the wet) when cornering and pushing while leaning (flickering). In addition stability, comfort, noise and ride feeling were evaluated as well as lap times in the wet at Vizzola, where the Red-Live.it tester rode for four fast laps with each tyre, discarding best and worst results and taking the average result of two other passes. Here below the final ranking (which does not provide a score) of the Italian online magazine: 1) Pirelli SCORPION™ Trail II 2) Metzeler TOURANCE™ Next 3) Dunlop Trailsmart II 4) Bridgestone Battlax Adventure A40 4) Continental Trail Attack 2 4) Michelin Anakee III Expressly designed for adventure touring motorcycles and the latest generation of enduro street, SCORPION™ Trail II is the synthesis of the best features offered by an off-road product and those covered by a sport touring tyre. SCORPION™ Trail II is the new Pirelli tyre designed specifically to meet the most demanding market expectations, it has an aggressive tread look supported by strong technological innovations and important features such as stability even at high speeds, traction on dirt track, handling, comfort and grip in any riding condition. SCORPION™ Trail II is available in the following sizes: 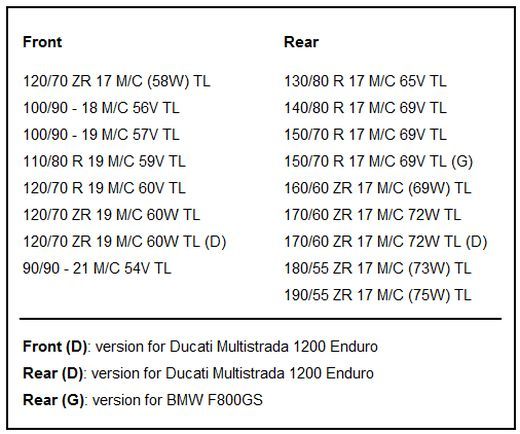