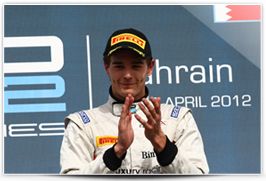 A week after the Bahrain Grand Prix drew to a close, the GP2 drivers – exclusively supplied by Pirelli – took part in the second two races of the feeder championship’s double-header held at the Sakhir circuit. The two races at the first stand-alone GP2 event followed the usual format, with a feature race including a pit stop during which at least two tyres must be changed, followed by a sprint race with no pit stops. Ambient and track temperatures in Bahrain were however a little cooler than they had been during the previous grand prix weekend. The drivers had three sets of the Pirelli P Zero hard GP2 tyres at their disposal, along with just one set of the P Zero medium tyre. This a new measure introduced by Pirelli to GP2 this year, designed to introduce an element of strategy to the races. Knowing when to use the softer tyre proved to be key to the strategy at Sakhir, which was as usual characterised by warm temperatures and a track made dirty by sand blowing in from the surrounding desert. Caterham’s Giedo van der Garde used the medium tyres to set his pole time of 1m42.451s in qualifying: one-tenth of a second quicker than DAMS driver and championship leader Davide Valsecchi, who had dominated the previous Bahrain weekend. But it was Valsecchi who went on to claim his third consecutive win in the feature race, when he passed van der Garde, who was struggling with tyre wear, just before they both pitted. “As soon as van der Garde was struggling, I caught him and overtook him immediately,” said the Italian. “That gave me a bit of an advantage for the rest of the race. It’s the perfect situation to be leading before the pitstop. We were lucky, but we were also competitive.” There was a new winner in the sprint race the following day, when Frenchman Tom Dillman claimed his first-ever GP2 victory for Rapax, after leading from pole position (the start order for race two is determined by the top eight reversed from race one) using the hard tyres. Luiz Razia was second for Arden, while a fighting drive from Valsecchi resulted in yet another podium for the Italian, reinforcing his lead of the drivers’ championship. Dillman commented: “It felt good, but maybe because of my lack of experience I pushed a bit too much at the beginning and at the end I lost quite a lot of pace. Maybe next time I have to keep the tyres alive a bit longer, but it worked well today.” Pirelli’s racing manager Mario Isola commented: “Again, we have seen from the second races in Bahrain that the drivers have learned how to get the most out of their tyres and use their experiences from the past, even though conditions in the feature race in particular were different from what we encountered the previous weekend. Again we saw a perfect strategy from Davide Valsecchi, who was able to judge his pace perfectly during the first stint of the race and build his third consecutive victory from there, thanks also to a very effective pit stop strategy. Our emphasis with the GP2 tyres and regulations this year is to help prepare the drivers for the sort of decisions that they will have to take on a regular basis in Formula One.” The next round of the GP2 series takes place during the same weekend as the Spanish Grand Prix at Barcelona from May 11-12.