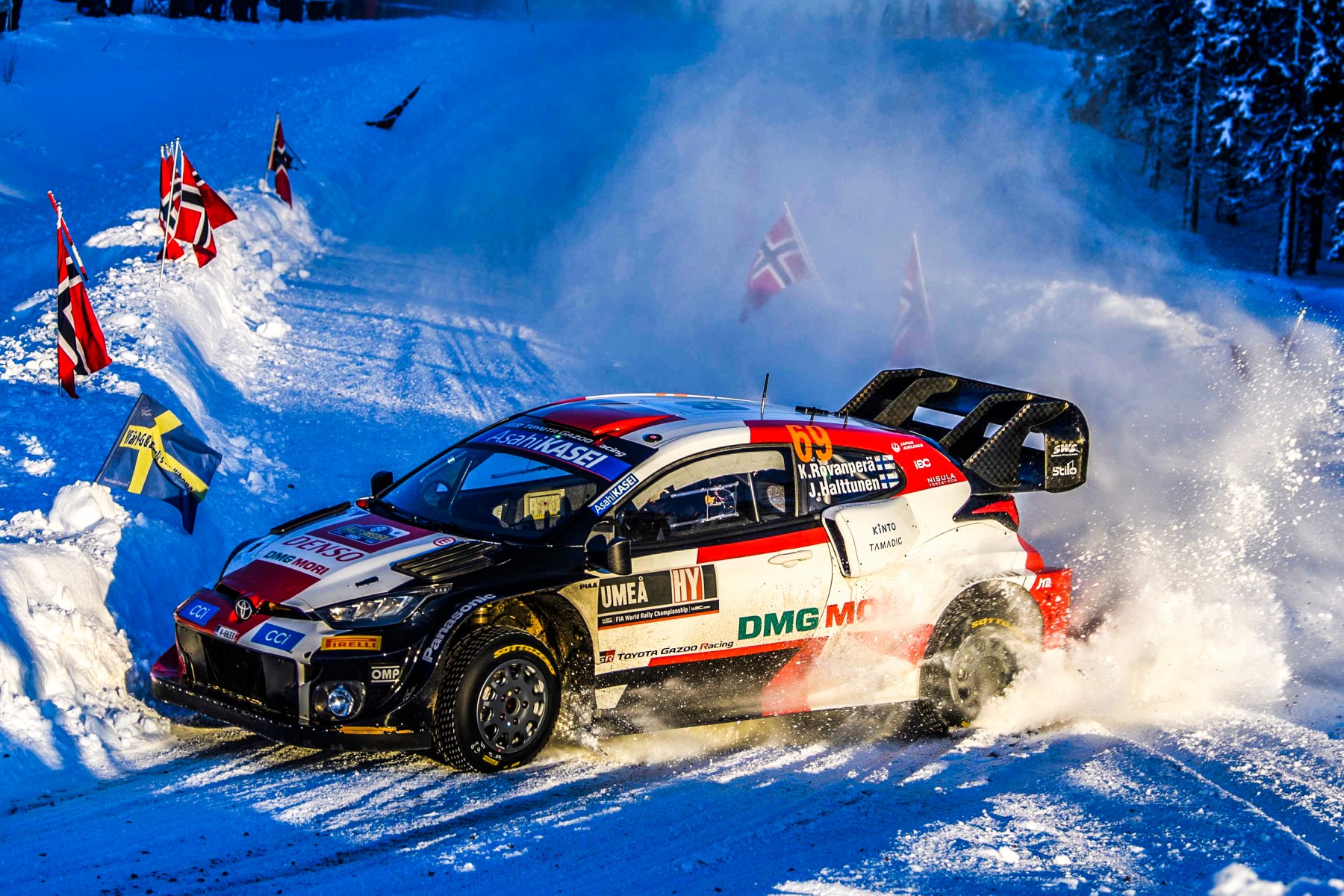 This year’s Rally Sweden moved north for the first time to a new base in Umea, driving on ultra-rapid stages that are among the fastest the championship has ever seen: thanks also to the new generation of hybrid World Rally Car, which features extra torque.
Faced with this ultimate test, the new Pirelli Sottozero Ice J1B tyres delivered unprecedented levels of performance, with some average speeds in excess of 130kph right from the shakedown.
Toyota driver Kalle Rovanpera, aged just 21, took the lead on Saturday morning and then consolidated his advantage throughout the remaining stages, to end up with an advantage of more than 20 seconds over Hyundai’s Thierry Neuville.  Esapekka Lappi finished third on his debut for Toyota.

The winning tyre
There was just one tyre available for Sweden in the top Rally1 class: the Pirelli Sottozero Ice J1B, which features 384 tungsten-tipped studs that protrude seven millimetres from the tread pattern, which is especially designed to disperse loose snow and bite into the ice below.
This year, the sidewall of the tyre has been reinforced to cope with the characteristics of the new cars and ensure optimal reliability. With no punctures reported over the course of the 17 rapid stages, these new tyres passed the toughest test possible in temperatures that dipped to below minus 10 degrees centigrade.

The key stage
Key stage: SS14 Langed 2 (19.49km)
Run twice on Saturday, this was one of the fastest stages of the rally that proved to be decisive on Saturday afternoon, when Rovanpera set a blistering pace to win it by 4.5 seconds and extend a crucial advantage. This stage was typical of what the new Rally Sweden route was all about, with the drivers keeping the throttle planted in most places through open forests and fields – with the exception of a few villages that provided a different technical challenge, where a precise turn-in was vital.

Terenzio Testoni, Pirelli rally activity manager
“All the work we have done to strengthen our Sottozero for the latest generation of Rally1 cars paid off this weekend, both in the perfect winter conditions of Saturday and Sunday, as well as on Friday, which featured sections of gravel as well as the longest stage of the rally. Even with some rocks on the road, we had no punctures at all despite the extreme speeds and conditions, thanks to the reinforced Sottozero structure. Stud retention was also very strong as a result of our patented process that locks the studs in place during vulcanisation. So we can say that our objectives have been met here.”

The biggest challenge
With just one type of tyre available, the strategy centred around keeping the studs in as good a condition as possible and deciding whether to take one or two spare tyres (on the final day, M-Sport driver Craig Breen took no spares at all). These two ideas are interconnected, as it’s even more important to keep the tyres in good condition if carrying only one or no spare. A clean driving style helped to keep all the studs in place on the gravelly sections, while drivers could save some weight and therefore add speed by minimising the quantity of spare tyres carried. On the last day in particular, many drivers saved their tyres for the Power Stage, which carried extra championship points.

The class winners
Reigning WRC2 champion Andreas Mikkelsen made it two wins out of two this year in his Skoda Fabia, with the battle effectively decided on the penultimate stage after Ole Christian Veiby spun his Volkswagen Polo into a snowbank. This was also the opening round of the FIA Junior WRC, which used four-wheel drive Rally3 cars for the first time, equipped with Pirelli’s Sottozero Ice WJA tyres. Great Britain’s Jon Armstrong won the Juniors, having gone into Saturday night’s superspecial just 0.7 seconds behind Finnish driver Lauri Joona.