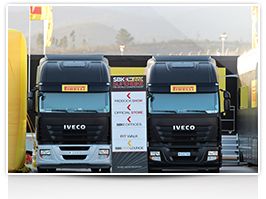 Pirelli is going to be back in action this weekend at the historic American circuit of Laguna Seca with the riders of the eni FIM Superbike World Championship after an absence of nine years. The last time the championship raced here dates back to 2004, the first year of Pirelli as the sole tyre supplier. Pirelli is bringing the new 2013 17-inch Diablo Superbike tyres in SC1 and SC2 for the front and SC0 and SC1 compound for the rear. At Laguna Seca only the Superbike riders will race, with Race 1 taking place on Saturday and Race 2 on Sunday, in both cases at 2 pm. With three rounds to go, the Championship is more open than ever with four riders within 33 points. The Englishman of the Kawasaki Racing Team, Tom Sykes, thanks to the second and third place achieved in Turkey, remains the leader of the overall standings with 323 points but the advantage over closest rival Sylvain Guintoli (Aprilia Racing Team ) is only 8 points and the team mate of the Frenchman, Eugene Laverty, with the double scored ​​in the last round, is still in the running for the title missing just 26 points from the leader. Despite some difficulties, Marco Melandri (BMW Motorrad GoldBet SBK ) is still in contention to win the championship, while teammate Chaz Davies, with a gap of 84 points from the first, could surprise but hardly fight for the title. 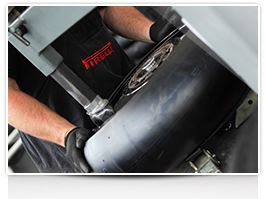 Laguna Seca was built in 1957 and is located 250 meters above sea level, not far from the town of Monterey which overlooks a beautiful bay in California. The track is situated on a hillside, starting from the bottom of the valley it then develops towards the top corner from the curve 5 till the 8 and 8a curves, where it goes over before falling back sharply towards the finish line. In 1988, the circuit underwent a change creating the section between curve 2 and curve 5, which was necessary in order to achieve the minimum length required by the FIM rules. More recently, between 2005 and 2006 , some sections have not been modified to change the design of the track , which remained unchanged apart from the minor operation to the bump before the Corkscrew, but to expand the escape routes, replace the curbs, enlarge the main straight, move some protections, all to make it safer. It 's definitely a circuit where overtaking is difficult because there are relatively few points where is possible to bring the attack. Laguna Seca from a tyre point of view: Mazda Raceway Laguna Seca is a circuit of 3610 meters (2.243 miles) with 7 left-hand curves and 4 right, the rider in pole position starts on the right side. The track has a width of 15 meters with the longest straight which measures 453 meters (0.281 miles), and the track runs counter-clockwise. 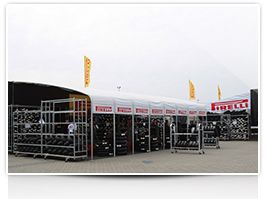 The configuration of Laguna Seca is quite special and different from other Championship circuits. The particular position of the track, located right on a hill not far from the sea, gives rise to large variations in asphalt temperature between morning and afternoon sessions, so we still need to bring the SC0 solution, more suitable for high temperatures, and the SC1, more protected when the temperatures drop. In some particular sections such as the famous "Corkscrew" (Turn 8 and 8a), a very spectacular chicane situated on top of the hill that runs on a very steep slope and which usually riders cover with a speed of around 80 kms/h, we are seeing rapid counterslope changes of direction that stress the front tyre and, at the same time, the many load transfers may affect the grip of the rear tyre. Another particular section is the start-finish straight, which is very short, with two slight changes of direction where the maximum speed is reached, equal to 270 kms/h for Superbike motorcycles. Finally to do the right curves 3 and 4 allows you to get a good lap time, which is why it is very important that the tyres have an excellent performance even on slow corners of approximately ninety degrees. Laguna Seca from a technical point of view: "Laguna Seca is perhaps the most interesting circuit in the United States because of its configuration with ups and downs and fast parts alternating with slower," said Pirelli Moto Racing Director Giorgio Barbier "It is in fact a track very varied since it has situations which change rapidly with tight corners and high points and some points such as the famous Corkscrew which is definitely one of the toughest on the calendar. It is also a track with a quite low average speed and despite not being one of the most difficult for the tyres is still a great challenge for us as since the last time we went there it's been almost 10 years. The circuit has been resurfaced and we do not have any recent parameters on which to rely. As we have not raced there since  2004, the first year of Pirelli as the sole tyre supplier, let us remember, however, some important elements. First, the track could appear dirty on Friday, partly because of the presence of artificial sand but, as I recall, one of the most curious feature of this track is due to its position and consists of the fog which can arise in the early hours of the morning, hours in which the temperature can be several degrees lower than in the afternoon. We'll see how the riders will face this new track in which undoubtedly we are very happy to come back because it is a circuit that has made and continues to make the history of motorcycling." Pirelli solutions for the Superbike class: To face the third last round of the season, Pirelli will bring a total of 1,310 tyres that will be available to the Superbike riders, the only ones who will attend this round. 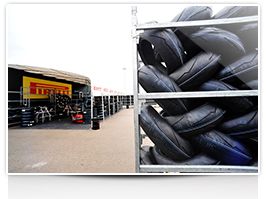 Each rider will rely on 29 front and 31 rear tyres including 2 qualifier supersoft tyres to use during Superpole, 4 intermediate and 8 rain tyres for the front as well as for the rear. Regarding slick tyres, there will be 2 solutions at the front and two for the rear. For the front Pirelli brings the two solutions already brought in all 2013 rounds, the standard SC1 (R426) in soft compound and ideal for low external temperatures and/or moderately severe circuits and the standard SC2 (R982) excellent for high air temperatures because it guarantees solidity on the tread band. At the rear, the standard SC0 (R1261), a soft solution which made its debut at Monza with the reinforced central area and has been used at Donington, Portimão, Imola and Nürburgring with success. Ideal for tackling smooth asphalt and high temperatures. It offers, in fact, maximum tread contact on smooth asphalt and maximum traction development at high temperatures as well as higher resistance to thermal performance decay. It is easily identified by two parallel white strips on the tread pattern. The alternative available to the riders is represented by the standard SC1 (R828), a solution in medium compound already present in the first three rounds as well as in Imola, Silverstone and at Nürburgring and visually recognizable because of a white stripe which is accompanied with a blue strip on the tread.