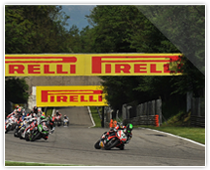 The new Diablo Superbike 17-inch SC0 compound, the softest in the range, was the tyre of choice for the Superbike round held at Donington Park in England. Following its debut during testing at Monza a reinforced compound in the middle section of the tyre was finalised.  All riders lining up on the starting grid at the East Midlands circuit successfully selected the standard SC0 for the rear. This therefore confirmed all forecasts made for the weekend’s racing and the performance witnessed at the Italian circuit. Despite the pleasant temperatures still being on the limit for its use, the Diablo Superbike SC0 acquitted itself very well, enabling all riders to use the tyre offering the best grip of those available without suffering deterioration or problems caused by the coldish temperatures. What is more, in the second race, the new SC0 lowered the fastest lap time by almost a second compared to the previous year. The work carried out by Pirelli engineers now means that Superbike riders are offered a softer compound with a broader spectrum 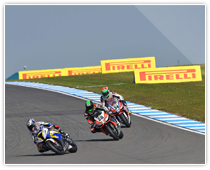 of use than was previously available. The tyre no longer requires higher temperatures in order to be effective, but can now handle lower temperatures as well, something that up until last year would only have been possible with the SC1 intermediate solution. For the front, the riders were almost equally divided between the SC1 standard solution and the SC1 development solution, the latter being chosen by all riders on the front row of the grid.