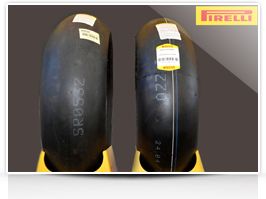 The results of the tests carried out today on the Motorland Aragòn track to have the Superbike riders try out the tyres with which they will race starting from next season showed improvements on each lap of up to 1.5 seconds The new 17-inch Pirelli Diablo Superbike tyres with which the World Championship will be run starting from next season have passed their first test. The tests carried out today on the Spanish track, open to all and organised by Infront and Pirelli which bore the costs for the track and for supplying the tyres, involved the following teams with their respective riders: Aprilia Racing Team, Althea Racing, Honda World Superbike Team, FIXI Crescent Suzuki, BMW Motorrad Motorsport, BMW Motorrad Italia Goldbet, Kawasaki Racing Team and Pata Racing Team. Grillini Progea Superbike Team, ParkinGO MTC Racing and Team Pedercini instead chose not to take part in the development tests of the new 17-inch tyres but only in those relating to the new 16.5-inch solutions for the current season. The teams Red Devils Roma and Team Effenbert Liberty Racing instead communicated their decision not to perform the tests.

The test day programme involved two sessions, one organised in the morning and one in the afternoon, lasting 2 hours and 20 minutes each, during which the riders were able to try out 3 different 17-inch solutions on the front and 2 solutions on the rear, all in intermediate SC1 compound but different in terms of structure, construction materials and profiles. In particular in the test for development of the 17-inch tyres the riders first did a few laps with the 16.5-inch tyres in the SC1 compound which they have available during the year before moving on to the 17-inch solutions. The decision to perform the test with solutions still in SC1 compound, as already communicated, was taken to ensure that the riders were totally focused on the different size rather than on other features of the tyres. In the morning session the new 17-inch tyres were tested by Max Biaggi, Davide Giugliano, Jonathan Rea, Leon Camier, Leon Haslam, Ayrton Badovini, Loris Baz and Lorenzo Zanetti. In the afternoon instead it was the turn of Carlos Checa, John Hopkins, Marco Melandri, Michel Fabrizio and Tom Sykes. Each rider did on average approximately 30 laps.

The table below compares the results for the fastest laps of the single riders obtained in the order of Race 1 on Sunday, when the weather conditions were certainly more favourable than Race 2 and enabled them to achieve better times, and then in today's tests first with the standard 16.5-inch tyre that they have available in races and then with 17-inch tyres.

As can be seen in most cases the riders improved their lap times considerably, up to a maximum of 1.5 seconds. In other cases they equalled the performance obtained with 16.5-inch tyres. Giorgio Barbier, Pirelli Moto Racing Director commented: "The results of today's tests are a very promising starting point with no dark corners, on which to build new developments. The challenge for us at Pirelli will be to construct the new range and scaling starting from this interesting step forward”.

Thanks to the feedback received during the tests in the next few days Pirelli will identify the solution that was most appreciated by the riders. On this basis it will develop not only the tyre in the standard SC1 compound for next year but also the entire range of compounds. Already starting from 2013, these tyres will also be marketed and made available to all customers, who will in any case be able to choose whether to buy 16.5-inch rather than 17-inch tyres. With the introduction of the new 17” tyres in the Superbike World Championship from next year Pirelli will be present with this new size in all World and National Championships in which it takes part, with the exception of the British Superbike Championship which, given its importance, needs another year before being able to change to 17 inches. The change will however be made starting in 2014.