The historic circuit of "Mottaccio del Balmone" hosted the ninth round of the FIM Motocross World Championship which also marked the halfway point of 2015 season. The weekend was characterized by unstable weather that, especially on Sunday, has alternated sun and showers that turned the track in a hell of mud and channels. In these particular conditions the Pirelli SCORPION™ MX32™ have proved once again to be the best performing tyres and thanks to them Pirelli riders have monopolized the podium in both categories.

In MXGP class, Romain Febvre has won again, as he did in the last Grand Prix in France. The French rider, with SCORPION™ MX32™ 80/100-21 front and 110/90-19 rear, has won the opening moto and got sixth in the last after an incredible comeback. Fallen in the early laps, he rose up with the handlebars and front brake of his bike damaged. Febvre has not lost his nerve and raced to grab the overall win. SCORPION™ MX32™ for Kevin Strijbos too, second overall and winner of race 2, who preferred the120/90-19 at the rear. Third place overall for Todd Waters, equipped with the SCORPION™ MX32™ in the same sizes of Strijbos. Rounding out the triumphant day for Pirelli in MXGP class also came the fourth and fifth place of David Philippaerts and Jeremy Van Horebeek. Max Nagl, seventh overall, took to thirty points his lead in the standings, over Antonio Cairoli. The Sicilian was the only rider to use the SCORPION™ MX32™ MUD, but due to the arm injury that he suffered in qualifying race he closed the race in thirteenth position. The injury sustained by Clement Desalle in France did not allow the Belgian rider to join the race.

Pirelli has been unrivaled also in the MX2 class which was won by Tim Gajser. SCORPION™ MX32™ 80/100-21 front and 110/90-19 rear for him, for Jeffrey Herlings, second, and Jeremy Seewer, third. Only Aleksandr Tonkov, which has prevailed in the first moto and has finished the Grand Prix in fourth place overall, has chosen the SCORPION™ MX32™ MUD. Archived the first half of the season, the Championship will resume its journey next weekend from Teutschental, Germany, for the tenth round of 2015. Results: MXGP race 1 1. ROMAIN Febvre (FRA) 2. PHILIPPAERTS David (ITA) 3. VAN HOREBEEK Jeremy (BEL) 4. WATERS Todd (AUS) 5. LUPINO Alessandro (ITA) MXGP race 2 1. STRIJBOS Kevin (BEL) 2. NAGL Max (GER) 3.PAULIN Gautier (FRA) 4. WATERS Todd (AUS) 5. SIMPSON Shaun (ENG) 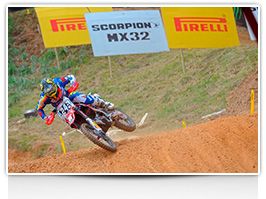