Tom Sykes on Kawasaki is eni FIM Superbike World Championship, to Aprilia the Manufacturers’ Championship; Pirelli, at its tenth year as unique tyre supplier of the Championship, is a winning example 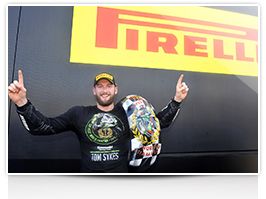 This year, in fact, Pirelli introduced the new award "Tattooed tyre of the Champion", a slick tattooed tyre delivered to the winner of the eni FIM Superbike World Championship. The drawing, which depicts the World Champion on his bike framed by laurels with the caption "2013 FIM Superbike World Champion", was first carved with mastery on the tyre and then painted with acrylic colors today. Not knowing who would be the winner of the Championship until the last round, the tyre has been in fact painted directly today in front of Pirelli hospitality truck in the Jerez paddock and fcolouring the livery and helmet of the rider was only completed as soon as is been designated as the World Champion. The result is a true impromptu work of art on the rubber. The new award was matched to that of "Best Lap Winner : fastest rider of the year", this year were both just won by the British rider of the Kawasaki Racing Team. After the win of the world title at Magny-Cours with one round to go by Sam Lowes in the Supersport class and Sylvain Barrier in the Superstock 1000 FIM Cup, the Saturday race saw the assignment of the missing title in the UEM European Superstock600 Championship, to the talented young Italian rider from San Carlo Team Italia, Franco Morbidelli, who won preceding in the overall standings the team-mate Alessandro Nocco and. In third place was Christian Gamarino (Team Goeleven). An all-Italian podium. Andrea Tucci, finishing ninth in the race, wins instead the PIRELLI Superstock 600 SERIES AWARD as the best wild card participant. The Pirelli Superstock 600 Series Award was created by Pirelli to allow the most talented riders of the national Stock 600 championships to take part in the last race of the Superstock600 UEM European Championship. To Jerez de la Frontera Pirelli has invited 5 riders from Italy, France, Germany and Spain, which have just competed in the last race of the European Championship. Pirelli's commitment in the eni FIM Superbike World Championship in 2013 was great and constant throughout the whole year. With this round it ends also the tenth year of Pirelli as the unique supplier for all classes of the FIM Superbike World Championship, a uniqueness in the history of motor sports at the international level that demonstrates how the formula of the control tyre, if developed properly, can satisfy both teams and riders and at the same time does not necessarily mean any compromise  from the tyre manufacturer in terms of development. On the contrary for Pirelli the World Superbike Championship has always been the main laboratory to develop tyres everyday more efficient which are not, it should be remembered, prototypes, but are regularly on the market and purchased by all motorcyclists. A control tyre formula that Pirelli has successfully exported all over the world, from the UK with the BSB, to the Superbike Series in Brazil, the Pro SBK in Sweden, the National Championship in Canada, the Supersport Series in Malaysia till the the Superstock 1000 Cups raced in South Africa and Costa Rica. All championships which over the years have always benefited, and continue to do so, from the unique supply guaranteed by Pirelli. In the same way in which it offered safety, performances and competitiveness in the control tyre championships, primarily in the Superbike World Championship, Pirelli has also increasingly benefited from experience gained managing to put on the market state of the art racing products that now are unmatched and are much appreciated by all riders . And it's also thanks to the know-how and the knowledge obtained in the control tyre Championships that Pirelli has always had a leading role, also in open tyre championships and competitions. This year, for example, Pirelli won in Germany in the IDM Superbike (German National Championship) the Superbike class with 11 wins out of 16 races as well as the Supersport class by winning all 16 races, in France in the FSBK (French National Championship) it triumphed in the top class with 10 wins out of a total of 13 races, in Italy in the Italian National Championship (CIV) has achieved success by winning 8 out of 10 races in the Superbike class and 10 wins out of 10 races in the Supersport class. And for the second consecutive year the Italian tyre manufacturer crushed the competition by winning both the 24 Hours of Le Mans moto as well as the Bol d'Or. 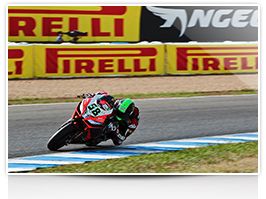 All this to show how the control tyre formula, when interpreted and implemented correctly, offers benefits to the involved championships as well as to Pirelli who can develop innovative products that are not afraid of open tyre competitions. Innovation which in 2013 was not lacking, thanks to a transition that opened a new era in the history of competition on two wheels, from 16.5” to the new 17-inch tyres for the main class. Pirelli's engineers have worked hard totally redesigning the new tyres which now have new profiles and side walls, and increased grip, and guarantee a reduction in movement and improved stability on cornering as well as maintaining performance during the race. The range of compounds have also been designed from scratch on the basis of the new structure of the 17-inch tyres. The new compounds are softer, more versatile and higher performing: with only two front and two rear tyre compounds, unlike the three used in the past, it has been possible to cover every race of the Championship because Pirelli has managed to considerably increase the range of use of each compound. Not only that, the new Diablo Superbike 17-inch tyres since their debut gave much satisfaction to the Pirelli designers and to the riders of the Championships who, thanks to the performances of the new product, have greatly improved the lap times compared to 2012 beating many of the fastest lap records of the circuits in which the championship stopped in the 2013 season. Comment from Giorgio Barbier, Pirelli Moto Racing Director: "I think we can say without any doubt the season just ended has been a really great one. I can only congratulate first Tom Sykes and his team; last year he missed the title for nothing, 0.5 points, this year they have taken a beautiful and well-deserved revenge, Tom has been the most consistent rider all over the year and has immediately demonstrated to have a small advantage over his opponents, compliments to him and the whole team. Similarly I think that Aprilia has rightfully earned the Manufacturer Championship, both Guintoli and Laverty fought until the end with Sykes making his life hard and, as evidenced by the last four years, the one of Aprilia has always been a very competitive motorcycle and surely this must be a source of pride for all the Italian fans of the eni FIM Superbike World Championship. As for Pirelli I believe that the facts speak for ourselves: the one that has just ended is the tenth year as the unique tyre supplier of all classes of the eni FIM Superbike World Championship, season after season we have also strongly contributed to make the World Championship always more compelling maintaining high competitiveness in all classes, and this always in harmony and with an approach of communication with organizer, promoters, teams and motorcycle manufacturers. Today we are the longest running, and consequently the most successful control-tyre supplier in the history of motor sports at the international level and a demonstration of how dedication, commitment, technological development in the same way of listening and dialogue with all the parties involved in the World Championship are been the trump card to achieve this success. Our role in the Championship has never been that of a mere supplier imposing their own choice on teams and riders and I think that for this reason over the years we have been awarded. This year the challenge was great for us, the debut of new 17-inch Diablo Superbike tyres. Thanks to the know-how and the experience achieved in many years not only during the year there have never been any problems of any kind but the new product immediately was greeted with enthusiasm by all the riders and demonstrated its excellent performance allowing everyone to greatly improve the lap times. Now the look is already turned to 2014, remaining faithful to the active and constructive approach we always had in this championship, we are considering, in agreement with the organizer, how to contribute in our own way to keep the championship highly competitive, trying to let the EVO Superbike riders be able to gamble almost on par with the riders of the first rows. To attract public and interest races must be fought, exciting and funny, and we have always been working with that goal." Pirelli Best Lap Awards: 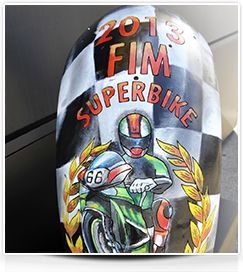 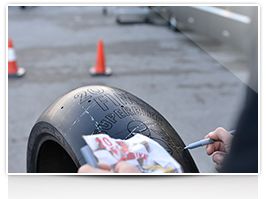 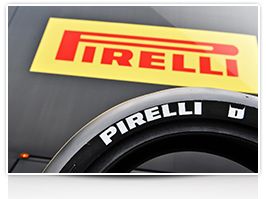 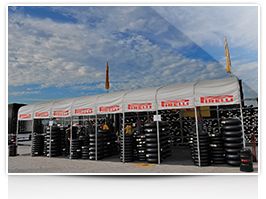 Pirelli Team in the Superbike World Championship • Pirelli personnel present at each round: 25 persons of which 1 Racing Director, 1 Press Officer, 1 Marketing&Sponsorships Responsable, 1 Racing Product Development Responsable, 1 Racing Compound Development Responsable, 1 hospitality truck Responsable, 4 track engineers and 15 in the technical area dedicated to mounting/dismounting tyres • Average age of the Pirelli WSBK team: 35 years • Total hours spent on average on a plane this year by each member of the Pirelli WSBK team: 116 hours (equal to 5 days) • Number of days away on average for each member of the Pirelli WSBK team during 2013: 101 (equal to 3,5 months) • Number of trucks present on average at each European round: 7 • Total kilometres travelled by each Pirelli truck in 2013: 35.412 kms Pirelli in the Superbike World Championship as sole supplier • The longest-lasting controlled tyre supplier in motor history: 10 years (2004-2013) • Total number of different solutions developed by Pirelli in those years for all the WSBK classes: 621 • Total number of solutions developed by Pirelli just for the Superbike class; 412 of which 315 dry, 26 intermediate and 71 wet • Number of circuits on which Pirelli tyres have run: 24 (Aragòn, Assen, Brands Hatch, Brno, Donington Park, EuroSpeedway Lausitz, Imola, Istanbul Intercity Park, Laguna Seca, Losail, Jerez de la Frontera, Kyalami, Magny-Cours, Misano Adriatico, Monza, Mosca, Nürburgring, Oschersleben, Phillip Island, Portimão, Salt Lake City, Silverstone, Valencia, Vallelunga) in 15 Countries • Number of Superbike races run as sole supplier: 256 of which 236 on dry and 20 on wet • Number of riders who have raced with Pirelli tyres in the Superbike World Championship: 449 of which 232 permanent and 217 wild cards • Average number of Superpoles improved each year with respect to the previous year: 9 • Average annual improvement of race lap time: 0,7 seconds • Lowest asphalt temperature ever measured: 6 gradi Celsius ad Assen (NL) • Highest asphalt temperature ever measured: 60 gradi Celsius a Phillip Island (AUS)

Tom Sykes on Kawasaki is eni FIM Superbike World Championship, to Aprilia the Manufacturers’ Championship; Pirelli, at its tenth year as unique tyre supplier of the Championship, is a winning example
Newsroom