Pirelli’s second-ever GP2 champion was crowned in Singapore, with DAMS driver Davide Valsecchi following in the footsteps of 2011 GP2 champion Romain Grosjean, who is now a Formula One race driver with Lotus – having also been involved with Pirelli’s testing programme in 2010. Valsecchi secured the GP2 title by finishing fourth in the feature race on Saturday, securing enough points to ensure that he could not be beaten by Arden driver Luis Razia: his only title rival, who finished fifth. DAMS clinched the GP2 teams championship for the first time on Sunday thanks to fifth for Valsecchi and seventh for his team mate Felipe Nasr in the sprint race. Carlin’s Max Chilton won the GP2 feature race after a tight battle with Lotus driver Esteban Gutierrez. Both drivers used an identical tyre strategy: starting on the soft tyre and then changing only the rears for their mandatory pit stops. The P Zero Yellow soft and P Zero Red supersoft were nominated for Singapore, and although the supersoft was a quicker tyre (which all the drivers used for qualifying) using it during the race would require changing all four wheels at the mandatory pit stop. By using just the harder compound, drivers could get away with changing the rear tyres only – as GP2 rules state that a minimum of two tyres must be changed – and so save time in the pits. Chilton led Gutierrez from the start, with both drivers stopping on lap nine. The highest-placed driver to use the supersofts for the feature race was third placed Fabio Leimer (Racing Engineering) who began the race on the supersofts he used in qualifying before switching to new softs: the same strategy used by Valsecchi and the majority of the field. A different strategy was utilised by iSport’s Marcus Ericsson, who drove the entire race on the supersoft tyre: starting on a used set and then changing to a new set on lap 11 of 28. Having qualified 17th on the grid, Ericsson used the strategy to make up 10 places and finish seventh. 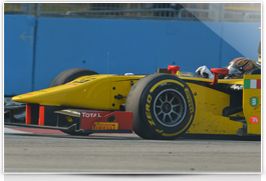 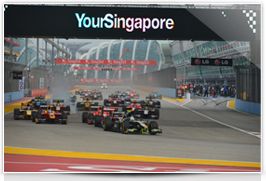 After being confirmed as champion, Valsecchi said: “It was a great feeling driving Pirelli this season. So it means that the races are spectacular, and this is because of the tyres. You have to conserve the tyres if you want to be first, and it's the same in Formula One, but also you have to be able to use them the best for one lap in qualifying, because if not you will not be at the front and able to compete.” The sprint race before the Singapore Grand Prix on Sunday, where pit stops were not compulsory, was won by Caterham’s Giedo van der Garde on the soft tyre. Lotus driver Esteban Gutierrez used the supersoft from start to finish, ending up sixth. Addax driver Johnny Cecotto chose to pit to change to the supersofts but a drive-through penalty ruined his chances, although a storming run through the field meant that he still finished ninth, on a circuit whose traction demands stresses the rear tyres in particular. Pirelli’s racing manager Mario Isola commented: “We’ve been privileged to witness some great racing in our second year of supplying GP2. We had a wet free practice session in Singapore, which made qualifying extremely complicated for all the drivers, but they still managed to get the best out of the tyres both in qualifying and the race. There was a fantastic battle between Chilton and Gutierrez throughout the feature race, where their tyre strategy meant that they were able to pull out more than three seconds over their rivals, even though they did not use the faster supersoft tyres. On the other hand, we saw Ericsson use the speed of the supersoft to make up 10 places from his grid slot. There were many interesting strategies in the sprint race as well, with Gutierrez, Cecotto and Calado using the supersoft very well. Congratulations to Valsecchi for winning the drivers’ title and also to DAMS for the teams’ title after an incredibly closely-fought season.” Pit stop summary: GP2 feature race: Chilton, Carlin: SN SU (9) Gutierrez, Lotus GP: SU SU (9) Leimer, Racing Engineering: SSU SN (7) Valsecchi, Dams: SSU SN (8) Razia, Arden: SSU SN (7) Nasr, Dams: SSU SN (6) Ericsson, iSport: SSU SSN (11) Van der Garde, Caterham Racing: SSU SN (9) Haryanto, Carlin: SSU SSU (7) Berthon, Racing Engineering: SSU SN (6) Leal, Trident Racing: SSU SN (6) Melker, Ocean Racing: SSN SU (12) Coletti, Rapax SSU SN (8) Richelmi, Trident Racing: SSU SN (8) Rosenzweig, Addax SSU SN (10) Canamasas, GP Lazarus: SSU SN (8) SU (22) Teixeira, Rapax: SSU SSU (6) Filippi, Scuderia Coloni: SN SN (6) SU (23) NC Onidi, Scuderia Coloni: SN SSN (13) NC Calado, Lotus GP: SU SU (6) SU (19) NC Palmer, iSport: SSU SU (8) NC Cecotto, Addax: SN SU (6) NC Gonzalez, Caterham Racing: SSU NC Trummer, Arden: SSU NC Guerin, Ocean Racing NC Binder, GP Lazarus: NC *** Copyright-free video news releases featuring interviews with Paul Hembery, as well as photographs and press releases are available for media use from: www.pirelli.com/f1pressarea. Follow us on Twitter @ Pirelli_Media or Facebook on www.facebook.com/Pirelli For further information please contact: Alexandra Schieren +33 607 03 69 03 alexandra.schieren@pirelli.com Anthony Peacock +44 7765 896 930 anthony@mediatica.co.uk *** Francescopaolo Tarallo +39 334 684 4307  francescopaolo.tarallo@pirelli.com (Head of Product and Motorsport Communications)