WorldSBK circus moves to Magny-Cours for the third round, Pirelli brings new full-wet rear solution ready for use in case of rain

The French round could declare the winner of the Championship in the major class with two rounds to go, while everything is still to be played for in the other classes 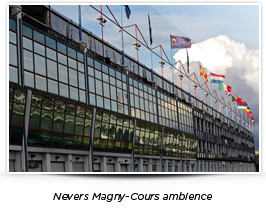 For this round Pirelli, for both the WorldSBK and WorldSSP classes, confirms the dry solutions already seen in action in the previous rounds of Laguna Seca, Lausitzring and Portimão. Considering the rainfall possibilities typical of this area at this time of the year, Pirelli has decided to add to the standard front rain solution a new development option whichcould play a key role in case of bad weather over the weekend.

With six races still to be played and 150 points at stake Jonathan Rea (Kawasaki Racing Team), who heads the overall standings with 120 points ahead of teammate Tom Sykes and 135 over ducatista Chaz Davies, could seal the Championship with two rounds to go. Also in the Manufacturers Standings, Kawasaki comes to Magny-Cours 70 points ahead of Ducati.

All positions still need to be decided in the other classes. In the WorldSSP, with 75 points still in play, Kenan Sofuoglu (Kawasaki Puccetti Racing) leads the overall standings only 4 points ahead of Frenchman Lucas Mahias and 31 on South African Sheridan Morais, both on Yamaha. In the Manufacturers Standings, however, Iwata's (Yamaha) company has a 9-point advantage over Akashi's one. Even more hard fought, the WorldSSP300 sees potentially struggling for the title eight riders, although having the greatest chances of winning are the Italian Alfonso Coppola (SK Racing), who leads the standings with 1 point advantage over the Spaniard Marc García, 18 over the Dutchman Scott Deroue and 19 over Mika Perez. Again in this case Yamaha precede Kawasaki in the overall standings with a 39 points advantage. In the European FIM Superstock1000 Championship it’s a battle between the current championship leader Michael Ruben Rinaldi (Aruba.it Racing - Junior Team) and  Kawasaki’s Turkish rider Toprak Razgatlioglu, with the Frenchman Florian Marino following at 22 points from first. In this case, to drive the standings is the Ducati Constructor with 10 points advantage on Kawasaki and 11 on Yamaha.

The Nevers Magny-Cours track is 4411 metres long, with nine left-handers and 11 right and a finishing straight which measures 250 metres in length. The maximum slope uphill is 2.38%, while falling by 2.68% with a minimum bend radius of 5 metres and a maximum of 474.45 metres. The rider in pole position will start on the right hand side of the track.

The 1960's construction of the Nevers Magny-Cours Circuit was wanted by then Mayor Jean Bernigaud and the circuit was opened in March 1961 with a two kilometre long layout designed specifically for two and four wheels. Nevers multifunctional complex evolved again during the Eighties, changing several times and adapting itself to the demanding standards in order to obtain the certifications required to host prestigious championships. The latest configuration of the Burgundian circuit, still used by the FIM World Superbike Championship, dates back to 2003, with the change of the two sectors called Château d’Eau and Lycée.

The French track is characterised by sudden deceleration and re-accelaration, interspersed with medium long straights, with plenty of altitude changes. In its default configuration it also provided a hairpin (Adelaide) with one of the heaviest braking points present among the international circuits, to arrive from a fast straight. Beyond these technical aspects, the asphalt surface is extremely smooth and regular, and therefore the circuit of Magny-Cours has never presented a particular challenge for the tyres, also it is not particularly loved by the riders as it offers few opportunities to overtake.

Pirelli arrives to Magny-Cours with a total of 5022 tyres for the four classes of the MOTUL FIM Superbike World Championship.

WorldSBK riders will have in total seven dry options, four front and three rear. Additionally, those who arrive on Saturday at the second Superpole® session will be able to rely on a qualifier tyre, in this case the W0692 solution already used by riders at Portimão.

The novelty for the major class riders will be a rain development solution: in addition to the standard DIABLO™ Rain tyres, Pirelli has decided to bring a new solution, the W0461, already carried to Lausitzring where riders could only partially test its features. It is in the larger 200/60 size and also uses a different distribution process of the compound on the carcass.

Returning to the available slick solutions for the front, Pirelli confirms all the options already seen in action at Lausitzring and Portimão: the standard SC1 (soft) and SC2 (medium) compounds will once again complement the development SC1 V0952 solution that starting from Aragon was used in all rounds, and the development SC1 W0657 that was introduced by Pirelli at Lausitzring, then used by some riders also in Portimão. The peculiarity of this latter option is that it has a very soft compound, even softer than that of the standard SC1, and therefore ensures an even higher level of grip.

As for the rear; two options in a soft compound and one in medium. First of all the development SC0 W0575, which uses the same compound of the standard SC0, but with structural arrangements already used successfully in the past, and was introduced in Laguna Seca and also carried to Lausitzring and Portimão. As an alternative to the W0575, in this round Pirelli bring the soft development solution W0576 that so far has only been carried out in the Laguna Seca round. In addition to the two soft development solutions and in the case of lower asphalt temperatures that may occur in the early hours of the morning, there will be the standard SC1that provides a medium hardness compound that is positioned halfway between the soft and hard solutions.

In the WorldSSP Pirelli confirms the solutions already taken both to Lausitzring and Portimão. At the front, together with the standard SC1 and SC2, there will be the SC1 development W0378 which debuted at Lausitzring and was also widely used in Portimão. At the rear there are the standard SC0, soft, and the development SC1 V1201, medium. The first should be the most used in case track temperatures are high enough, otherwise riders will count on the development SC1, more protected in case of cold conditions. 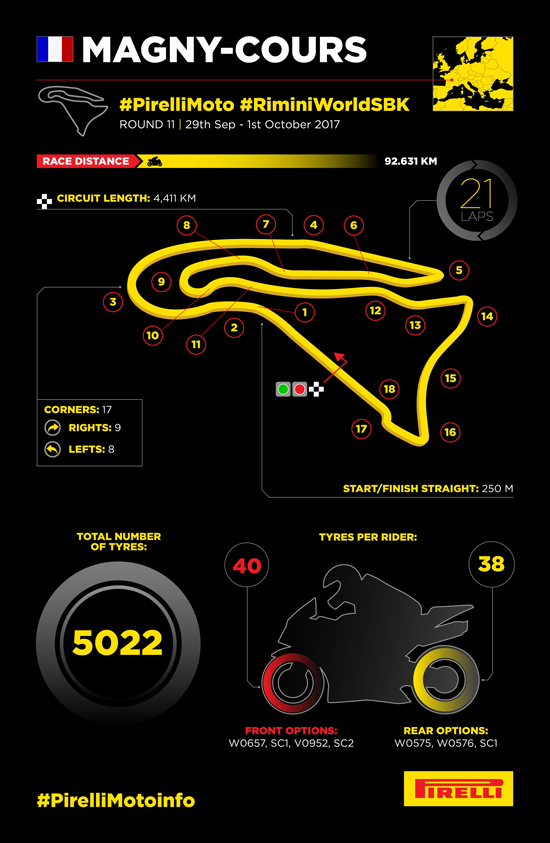 • Number of solutions (dry, intermediate and wet) for the WorldSBK class: 7 front and 6 rear

• Number of tyres available for each WorldSBK rider: 42 front and 33 rear

• Number of solutions (dry, intermediate and wet) for the WorldSSP class: 5 front and 5 rear

• Number of tyres available for each WorldSSP rider: 25 front and 24 rear

WorldSBK circus moves to Magny-Cours for the third round, Pirelli brings new full-wet rear solution ready for use in case of rain
Newsroom